COLUMBIANA — The 2012 baseball season was a special one for Cornerstone Christian head coach Tim Smith. He won his first ever baseball state championship, and on Jan. 18 was named the Alabama Independent School Association Class 1A Coach of the Year by the Alabama Baseball Coaches Association.

Smith was humble about receiving the honor and said that the credit goes all toward his 2012 championship team.

“It was a big honor,” Smith said. “I appreciate what it’s about, but to me, it’s about the kids. Kids make the coach. I had some good baseball players last year, and it wasn’t real hard to coach them to be honest.” 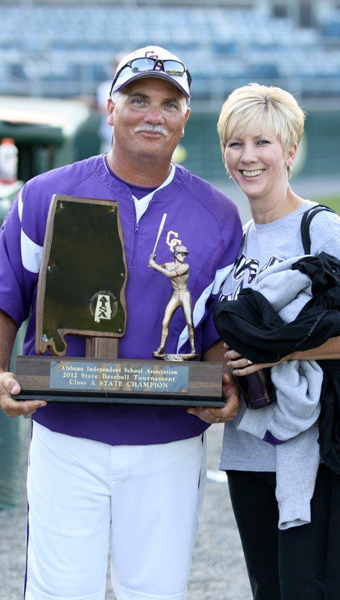 Most of Smith’s 2012 baseball team had just came off winning a basketball state championship, but had put in the work on both the court and baseball field to excel.

“Every day they were doing both sports,” he said. “You have to have some dedicated kids that want to play in both sports. It’s not easy.

“They were so dedicated and loved baseball so much it didn’t matter,” Smith added.

Smith and his wife, Angie, attended the Jan. 18 AlaBCA awards night that included awards from the high school level to the college ranks.

“It was a bigger even than I thought it was,” Smith said. “It was special because I am a baseball guy and you are in a room with nothing but baseball guys.”

Smith credits his success to the support he receives from his family. Along with his wife, his two children Heath and Aubri have been there for him through the ups and downs of his 15-year coaching career at Cornerstone.

“Any coach can tell you that you have to have a good wife, “ he said. “She’s a special lady cause she lets me go do what I love to do.”

As the 2013 baseball season quickly approaches, Smith looks to defend his state championship after losing seven players to graduation.

“We are just going to start over and that’s the only way I know how to do it,” he said. “We will go back to work and put the pieces back together and see what happens.”