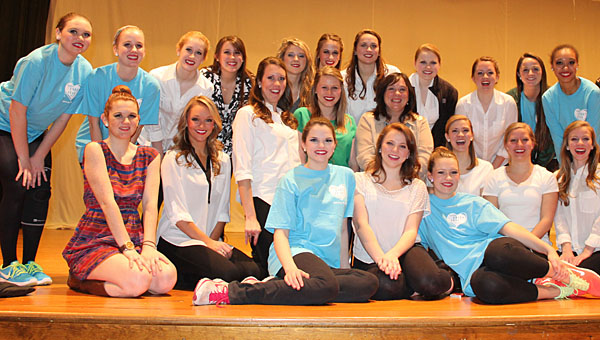 PHS Pantherettes past and present join Laura Cochran, second row, center, for a photo after presenting her with a keepsake photo album following With Every Beat. (Contributed)

At the With Every Beat Dance Showcase on Feb. 16, remembering became an action verb. The final number of this charity dance event benefiting Relay for Life, Children’s Miracle Network and Camp Bridges featured Pantherette alums dating back to 1988.
Thirty-seven alums performed to “All that Jazz,” featuring segments of tap, jazz and a grand finale kickline that was awe-inspiring. The crowd cheered appreciatively for the collective hours dedicated to bringing that final dance together.
Afterward, PHS class of 2011 grad and former Pantherette Rachel Abel, made a special presentation.
“It’s tradition here at PHS that senior Pantherettes get scrapbooks of their dance team memories,” Abel said. “Since Mrs. Cochran is graduating from dance team this year, we’ve all made this scrapbook for her.”
“I can’t believe that all of you did this. How did you manage this?” Cochran replied.
Abel started the scrapbook movement. Each dancer submitted one page to Abel who finalized the book.
On stage for final pictures, the dancers posed for family and friends. The parents of Meredith Ward and Carson Sumpter were in the crowd—and many of us were remembering their children.
Two years ago, Sumpter sang an original song he wrote for the event as his girlfriend, Maddie Gathings, danced. After Sumpter’s death in the summer of 2011, Gathings and her friends performed a tribute dance at last year’s With Every Beat.
As the alums tapped, I remembered how Ward loved to tap dance! Ward made tap shoes speak their own language. She was living her dream seven years ago performing as a professional dancer when a heart problem caused her to pass away in her sleep.
With Every Beat began following Ward’s death as a remembrance to her and a fundraiser for the American Heart Association. Liz Cochran carried Ward’s name to a national audience at the Miss America competition in 2010.
As the photos ended, Robin Ward, Meredith Ward’s mom, said quietly, “I wish I could say, ‘Thank you girls for seven wonderful years! Thank you all!’”
They hear you, Miss Robin.