“I’m really glad it’s slowed down a lot, because it was really wearing us out with so much at once,” Barnett said during a September interview. “That’s how it comes. You won’t get anything, and then it’s back to back. We really got hammered this year.”

The team responded to three drownings and the high-profile murder of Carrie Elaine Gentry, whose body was discovered in her vehicle submerged a water-filled Leeds quarry.

“(The Gentry case was) one of our most intense – just the whole ordeal and everything that was at stake with it. That was pretty intense,” Barnett said. “We were very cautious with how we worked that.”

To join the team, members must be full-time employees of the city of Calera. Employees then apply for a dive team position. The team is made up of certified divers, boat operators and evidence technicians.

“We feel out how the individuals work as a team and how their mindset is. This is not a self-promoting thing. It’s go out and help the community and be a team-oriented unit,” Barnett said. “We try to sway away from anybody who wants to do it to get self-recognition.”

LaTresa Kelley, communications supervisor with Calera Police, has been with the dive team since the beginning. Kelley is the voice on the line when anyone calls the Calera Police Department, and when she mans ground support for a diver, her voice carries through the communication system headset to reassure her diver. 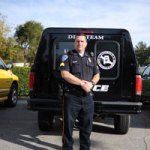 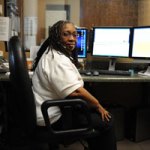 The divers communicate with both the communications system and line signals, which involves tugging on a rope to convey needs to those on the ground or in the boat.

“Most of the time, they’re in black water, so we tug on the line and tell them to change position,” Kelley said. “You tug a certain amount of times to have them resurface. We can’t rely on technology all the time, because the com system can go out.”

Many of the team members on land support are also trained divers, and can fill in wherever needed, although Kelley stays on land.

“I respect the water enough to know I don’t want to do it,” she said.

For years, Kelley, mother of three, grandmother to two, was the only woman on the team.

“I had to hide when they changed out of their wet suits and pretend I didn’t see anything,” she said, laughing. “It’s a small department, a close-knit department anyway.”

Now, the team has two women, Kelley and Calera jailer Kristi Sterling, a no-nonsense Alabaster woman with long blonde hair who has worked for the Calera Police Department for 15 years. Sterling joined the team three years ago.

“We’re outnumbered. It’s a man’s world, but I love it,” Sterling said, laughing.

Sterling has trained as a diver, but mainly stays on land for diver support.

When on land support, Sterling keeps up with her diver’s air pressure and how long the diver has been under the water. She also sets up diving equipment to keep the diver from tiring.

Deven Heathcock, a stoic day-shift patrol sergeant with years of law enforcement experience, joined the team in 2003. While he is a certified diver, he mainly runs land support as opposed to diving these days, which gives other divers the opportunity to be in the water.

“It’s specialized training on land and water. We tend to put our strongest assets to fill different tasks,” Heathcock said. “It’s a necessary relationship. The diver needs the security of land operations. They need to be in sync with each other.”

By NEAL WAGNER / City Editor Alabaster residents with green thumbs who don’t have room for gardens at their homes soon... read more