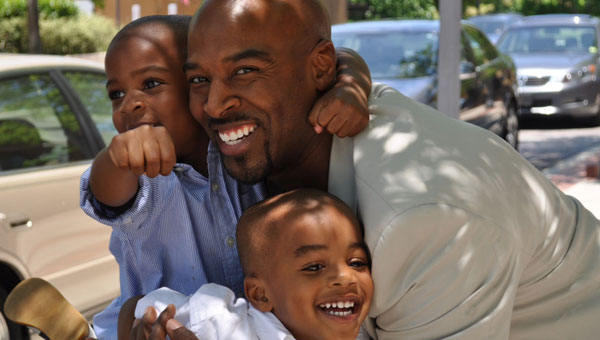 Jason Long knows a great deal about leadership, not just because he is the vice president and community banking relationship manager for Regions Bank.

Or, because he received his B.S degree from Samford University.

He said it’s because he is the third oldest of eight children, ranging in age from 41 to 16.

Long is quick to credit his parents with his lessons in leadership and in life. His father worked three jobs to support his family, displaying for him an enormous work ethic. And his mother, one of 18 children, taught him that entitlement was not an option but the “boomerang effect” was. That meant whatever he gave out would come back to him.

“My attitude is my reaction to any given situation. It means understanding that it’s not what happens to me, but what happens in me,” Long said. “Even when I have to deliver undesirable information, it’s still my goal to help people understand the ‘why’ behind the decision and how we can work together to turn the negative present into a favorable future. Therefore, I have to always have the right mindset and attitude.”

After being in pharmaceutical sales for 12 years, Long became a community/business banker for Regions Bank. He partners with small business owners with the true intent of adding value to their respective businesses. Successful relationship management processes focus on the business owner’s business plan, business strategy, objective and operations.

His definition of leadership is “influence.”

“Leadership is a choice we make, not a position we hold within a company or organization. Because someone holds a specific title does not make him or her a ‘leader.’ If there is no positive or respective taking place, there is no leadership.”

Long is the head coach for K-1st grade flag football team at the Greystone YMCA, a board member for the Court Appointed Special Advocates, a leader of a men’s health and fitness small group at the YMCA and he leads a Man-to-Man mentoring small group.

Long is married to Kwawieta and they have two sons ages 6 and 4.