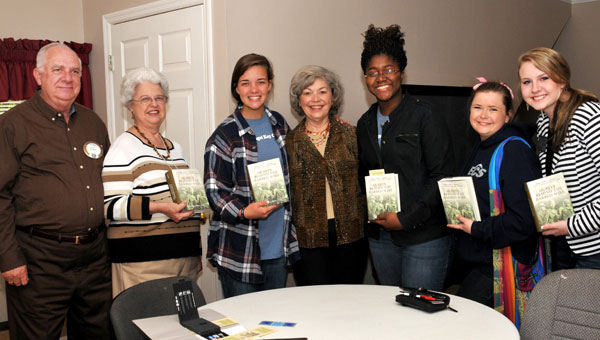 When Ruth Beaumont Cook spoke to the Helena Kiwanis Club about her book, Guests Behind the Barbed Wire, she pointed out a little known part of World War II history: At one time the Camp Aliceville internment facility was the largest in the country.

“The 1,000 German POWs, most from the Afrika Korps, who arrived in Aliceville in 1943 were malnourished and fearful of being forced into slave labor. They were surprised to be offered food — peanut butter sandwiches and coffee — and decent sanitary conditions.”

The people of Aliceville watched in curiosity as the POWs — touted as blond, blue-eyed “super soldiers” — arrived, only to be young men, many drafted while in their teens.

At camp, they first dug drainage ditches. Then gradually landscaped their surroundings. They built a greenhouse and grew vegetables and played soccer.

“Many were educated men; they formed three bands and a choir, and had a kiln where they made pottery. They printed a newspaper, Der Zaungast, (literally, the Fence Guest) on an old restored press they called the Flying Dutchman.”

Two prisoners tried to escape — both were shot and buried on the camp property — then later re-interned at the German Italian Memorial Cemetery.

After the war’s end, Aliceville families continued to keep in touch with some of the POWs. The camp was closed in 1946 and torn down. In the 1980s, POWs began returning to Aliceville to show their families where they had actually happily lived out the war.

A reunion was held in 1989, and again in 1995 when former POW Wilhelm Schlegel, planted a seedling of a gingko tree saying, “This tree we now plant in peace. Let it be a symbol of hope for a peaceful future.”

Ruth Beaumont Cook and husband, Barney, attended the 2006 reunion. She still remembers the remarks of former POW Eugene Wanders’ daughter, Ellen, who recalled, “The German prisoners captured by the Russians were made to eat cockroaches off the wall; my father was allowed to make doughnuts in the mess-hall kitchen on Sunday morning.”

Kiwanis member Camille Maier shared, “I visited the camp myself when I was about 4-and-a-half and my grandfather, James Cicero Fancher, was a civilian carpenter for the Army Corps of Engineers working to build the camp.”

Laura Brookhart is a community columnist and can be reached at labro16@yahoo.com.