Rise of the Alabama Phoenix Festival 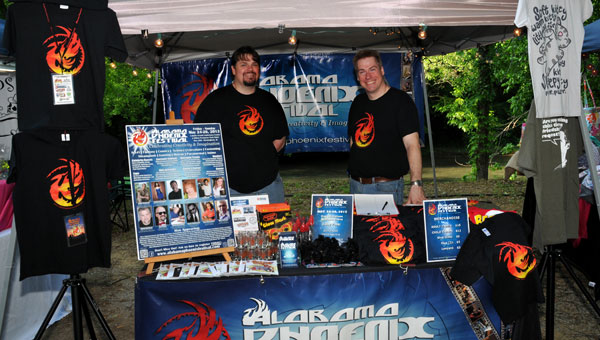 A chance meeting with Tim Stacks, project engineer for Cotney Aerospace Inc. in Helena, introduced me to an entirely new family friendly, multi-genre event, now in its second year — The Alabama Phoenix Festival.

The goal is to show how these genres lead to new ideas and advancement of tomorrow.

Here is just a taste of the nearly 100 participants that happened to pique my interest.

The website is very informative and well-written, beckoning with humor to all.

Meet Tom Brisco, the cartoonist behind “99 Reasons to Hate Cats: Cartoons for Cat Lovers.” Along with the joys of marriage, Brisco adopted his lady love’s cats and his book helps him cope with his hopeless situation. He also produces editorial cartoons on local issues for Birmingham News and Al.com.

Cam Crowder is an “avid gamer, reader and guitar nut who has had fancies of writing since he was a runty little ginger sitting on his grandfather’s knee” and now, when he’s not at work or playing

“Street Fighter” he pursues the humble joys of writing.

Gil Gerard has starred in numerous successful made-for-television movies and feature films. However, his millions of fans prefer to remember him as “Buck Rogers” from the Universal motion picture and NBC series, “Buck Rogers in the 25th Century.”

Also in the expo area, you’ll find a beautiful replica of the DeLorean time machine from “Back to the Future.” Functioning lights and all, and built by Oliver and Terry Holler, it will be on display for the duration of the event where you can get your picture made. Donations can be made through their organization, Tothefuture.org, whose mission and purpose is to raise money and awareness towards a cure for Parkinson’s Disease.

The event will be held Friday, May 24, through Sunday, May 26, at the Cahaba Grand Conference Center, with the schedule featuring sci-fi and fantasy media and literature, science and engineering, gaming, costuming, comics, steampunk and anime/manga.

All events and times are posted at Alabamaphoenixfestival.com.

Laura Brookhart is a community columnist for the city of Helena and can be reached at labro16@yahoo.com.