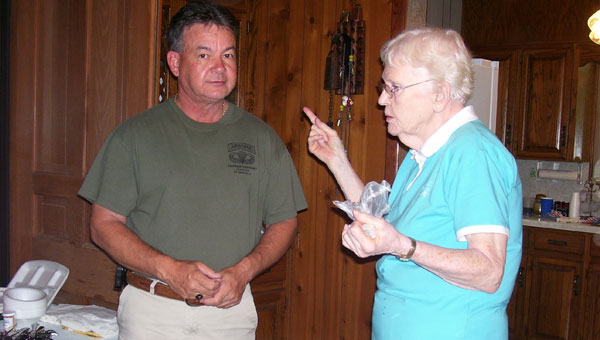 At the recent reunion at old Mt. Calvary Baptist Church and Cemetery, I met Stephanie Yancey Phelan, who drove up with family members from Florida.

They spent Friday night, the night before the reunion, at Hampton Inn, she said. The next morning at breakfast, they met Bob Davis, an attorney from Oklahoma and learned he was also in Alabama for a reunion. The Davis family reunion was held the following day at Pleasant Valley in Chelsea.

It so happens, that my husband Ken and Bob Davis have mutual ancestors a few generations back, and Ken and I also attended the Davis reunion. Family members of both Ken and Bob are buried in Pleasant Valley and Mt. Calvary cemeteries.

After Stephanie’s family told Bob about the Mt. Calvary reunion, he came to it with his Uncle Carlton “Gene” Davis of Chelsea.

Ken and I had not met Bob before reunion weekend but had heard about his family research from his Uncle Gene, a life-long friend of Ken. At the Davis reunion, Gene shared family booklets his daughter Leslie helped him put together.

The booklets give a brief history of the Davis family at Chelsea/Pleasant Valley and list several generations of the Andrew John Davis family.

The Rev. Davis gave five acres for Pleasant Valley Church and Cemetery, which he and David Newton Hodgens founded in 1876.

After years of researching and writing about these and other early families in the area, it was good to meet—at Pleasant Valley and Mt. Calvary reunions—family members, with whom I enjoy corresponding via Facebook and email.

Shelba Nivens is a community columnist for the city of Chelsea and can be reached at Shelbasn@juno.com.

Forest Lakes a place for fun with charities