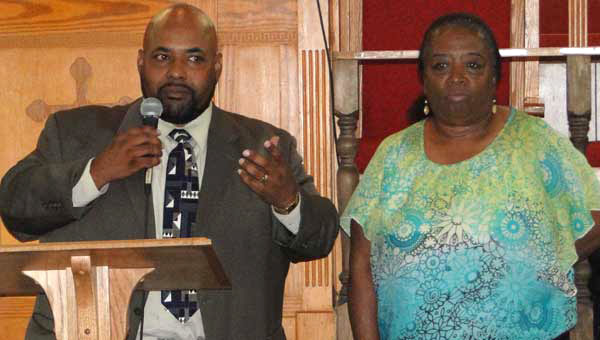 Pastor Kenneth Dukes and Joyce Lewis speak at a rally in support of section 5 of the Voting Rights Act on June 22 in Calera. (Photo by Mollie Brown.)

By MOLLIE BROWN/For the Reporter

On the heels of Nation of Islam leader Louis Farrakhan’s stop in Columbiana in support of the Voting Rights Act, a group interested in forming a Shelby County NAACP held a rally at the Shelby Spring Association District church in Calera on June 22.

“The NAACP started about colored people, but today it’s about human rights, people who have been discriminated against because of race,” Dukes said. “You don’t have to be a certain color to join and don’t have to live in Shelby County to be a member.”

Dukes emphasized starting a branch is a positive thing. He said it’s about creating a voice for people who don’t know how to speak for themselves and helping protect their rights. He said the local group would work together with county leaders to prevent disputes such as the Shelby County v Holder case that is before the U.S. Supreme Court. Dukes said he is an intervenor defendant in the case.

At issue in the Shelby County v. Holder case are sections 4b and 5 of the Voting Rights Act. Sixteen states, including Alabama, with a history of racial discrimination are required to obtain federal pre-approval of all changes in election procedure. The case stems from 2008 when the city of Calera drew new districting lines after the city’s population grew from 3,158 to more than 10,000 in about eight years. The U.S. Attorney General objected to those changes in August because it eliminated the only majority-black district in the city.

Calera held an election using the rejected districts, and the sole black member of the City Council was defeated in a run-off election. The U.S. Department of Justice threw out the city’s election results.

Shelby County attorney Butch Ellis filed suit in the United States District Court in 2010 citing Section 5 as a federal intrusion into state issues, then asked the U.S. Supreme Court to take the case following a May 2012 ruling by the district court that upheld the constitutionality of Section 5. A decision is expected next week and could be handed down as early as Monday.

About a dozen rally attendees were introduced to prominent community leaders who are helping to form the Shelby County NAACP branch. Alabama State NAACP representative Jerry Burnet and former Shelby County Commissioner Dr. Earl Cunningham spoke of the necessity of forming a branch in Shelby County.

Cunningham, a 30-year NAACP member, said Section 5 is the heart of the Voting Rights Act. Lewis said regardless of the decision in Shelby County V. Holder, the group will do whatever it has to do to protect human rights.

Dukes said once the branch is established, people with concerns will be able to contact the organization.

“When you can organize four, five, six hundred people in a matter of hours, it will give you a little more pull,” he said. “People listen to you a little bit better. That’s all we want, a voice.”

Prior to the rally about 40 applications had been submitted to start a Shelby County branch of the NAACP. One hundred applications are needed. Once the group receives 100 members, an application will be made to the national office for approval. Applications require a $30 fee.

By NEAL WAGNER / City Editor The Alabama Department of Transportation will close portions of Alabama 119 from Pelham to... read more