Behind the scenes at City Hall 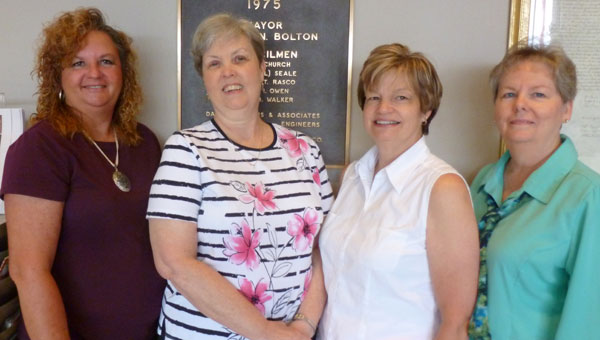 The recently hired City Clerk Mark Frey and Marketing Director Helen Dean have brought new ideas and energy to city hall. But behind the scenes is the work engine of Columbiana — four ladies who have 42 years of experience running the business end of Columbiana City Hall. They are Joanna Seale, Fran Sammons, Lisa Lively and Kathy Corbitt.

These are the “go to” support staff that work tirelessly behind the scenes to keep our city running with the details.

Joanna Seale is the Court Clerk and Revenue Officer. She began her work at City Hall in 1986 and works with the Columbiana Police Department handling court and violations as well as business licenses. Seale is from Columbiana, the daughter of the late Bet and Bill Dill, and graduated from Shelby County High School.

“I do not know what we would do without Joanne,” said Sammons. “She has the history and knowledge of the city through her years of experience.”

Fran Sammons, called “Mrs. City Hall” by Seale, is the Assistant City Clerk and has been at City Hall for seven years. Accounts payable is her forte, handling deposits, bills, bookkeeping, assisting Frey as needed. Sammons graduated from SCHS in 1970 and is the daughter of the Rev. Andy Walton, Sr. and the late Lexie Walton.

Lisa Lively, graduate of Shelby Academy, has been at City Hall for five years and is the Planning and Zoning Administrator and also works with seniors. Questions about property zoning and subdividing are Lively’s area of expertise. She also works with Donna Higgins, Senior Director, teaching exercise and working on grants and senior needs.

Clerical assistant is Kathy Corbitt who works Monday, Thursdays and Fridays at the front window assisting Sammons with deposits, receipting, filing and general office work. Corbitt and husband Charles have lived in Columbiana for 25 years and are very active at Columbiana United Methodist Church.

From the mayor, council, city clerk, marketing director and support staff, Columbiana has many people working for the success of this city.