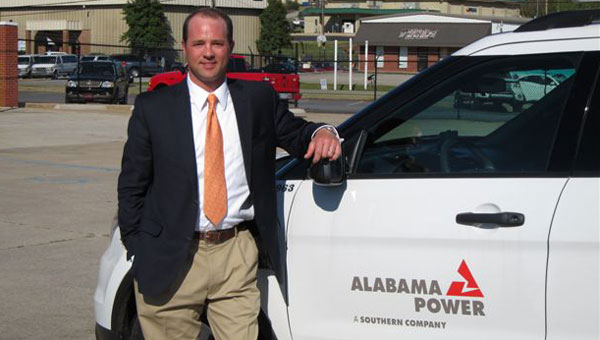 Alabama Power Company’s T.J. Fincher serves as external affairs manager for the South Region of the Birmingham Division. His job includes overseeing public relations, community and civic involvement and environmental affairs. He also serves as liaison between governments and elected officials in all of Shelby County, Homewood, Vestavia, Hoover, Mountain Brook and Leeds.

Everyone knows what Alabama Power Co. is, but what specifically do they do besides keep your lights on? They provide competitive pricing, reliable electric supply, and unparalleled service to 1.4 million homes, businesses and industries in the southern two-thirds of the state. They are one of four U.S. utilities operated by Southern Co., which is one of the nation’s largest producers of electricity. There are more than 78,000 miles of power lines carrying electricity to customers throughout 44,500 square miles. And to think all we have to do is flip a switch.

Fincher’s office is located in Pelham. He defines leadership as “influence on people.” Fincher says, “Everything we do or say provides either positive or negative influence. In my view, leaders take the personal responsibility for doing what is right. We deal with issues as best we can. We work inclusively with other people and at the same time, hold each other accountable. We address problems, we don’t accommodate them, and leaders see a bigger picture than what is directly in front of them at the time,” Fincher says.

“We understand our own strengths and weaknesses and act on reality, we anticipate challenges before they occur and make the tough decisions. Strong leadership means planning carefully constantly communicating and acting consistently,” Fincher concludes.

When giving leadership advice to young people he shares what he heard as an infielder in baseball so many times, “Play the ground ball or the ground ball plays you.” In other words, act, or be acted upon. Fincher stresses the importance of passion and volunteering for the hard jobs.

Fincher and wife, Hallie Bradley has one daughter, Bailey.

Webb was born to stand out