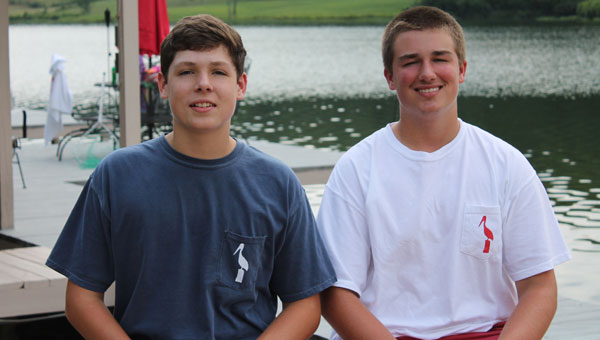 “Logan called me with the idea. We’d been talking about starting a business,” Carson Rector said.

“We were at the beach and I saw the success people were having with T-shirts,” Logan Burnett added. “We’d thought about the financial security a business that really took off could provide to help pay for college.”

Burnett and Rector, both Pelham High School sophomores, are looking toward the future. With older siblings in college, Rector knows first-hand about college expenses.

Burnett contacted Scott Blair who had been his business tech teacher.

“I knew that Coach Blair had the expertise to get a website up and running,” Burnett said.

As teenage boys, Rector and Burnett also realize the power of social media. With their website and social media, these young entrepreneurs are launching their new business—Southern Pier Clothing.

“Instagram is our biggest thing,” Burnett said. “Our following is growing.”

The Southern Pier T-shirt has a pelican on a post logo.

“I found this pelican photo on a blog,” Burnett said. “I contacted the photographer and he said we could use the image.”

Burnett credits Autumn Ward for adapting the image to a logo using her graphic design skills. Since Ward is a PHS Literary Magazine staffer, I was thrilled that she was using her design skills to help her friends in their business venture.

“We want to add visors to our line—and we’re expanding our T-shirt colors,” Rector said. “To our original white and navy, we’re adding crimson, orange, and we’re hoping for a green.”

“Polo-style shirts would be cool too,” Burnett added.

The shirts have some choices in logo colors with one white T-shirt having the option for blue Southern Pier text with a red logo pelican.

Hoping to get their shirts in local retail stores soon, the boys are ecstatic to have their business launched. Currently, they plan to invest their proceeds into the business to cover their start-up expenses and expansion. Check out Southernpierclothing.com or follow them on Instagram @southernpierclothing to keep up with these young southern entrepreneurs.

Preparing for the final combined year at PHS