Gifted gives back to Pelham 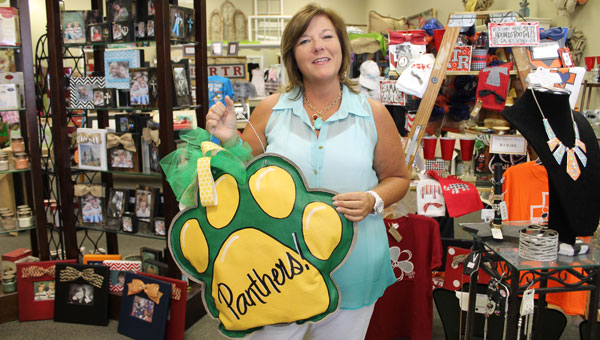 Paige Burnett, owner of Gifted, has an impressive selection of Pelham Panther and other unique gift items. (Contributed)

“I got them at the new Pelham gift shop, Gifted,” she said. “It’s close to where The Amen Corner was. They have everything Pelham Panther.”

I managed only steps inside the new boutique’s doors before I found shirts and dresses that I knew my youngest daughter would love. I introduced myself to owner Paige Burnett and told her I was shopping for Logan Burnett’s birthday. Although these Burnetts are no relation, the families know each other since Gifted’s owner, Paige Burnett, has two fine sons going through our Pelham schools.

Paige Burnett carried me straight to the Pelham Panther heaven of her store. Burnett also shared how she came to own Gifted.

“I was a single mom raising two boys with an established career at Blue Cross—then cutbacks came and suddenly, I was without a job,” Paige Burnett said.

Always industrious, she was soon looking for work and selling craft items to Gifted.

“The former owner hired me,” she said. “I was thankful for the job.”

“We’re expanding because our customers have asked for more,” she said.

Keeping the business open during the expansion, Burnett said the construction is minimal now that the two areas are joined. A grand re-opening is planned for Tuesday, Sept. 10 at 4 p.m.

Much of Burnett’s inventory is generated by local artisans creating one-of-a-kind treasures with reasonable prices.

Burnett showed me what she plans to donate to the upcoming PHS Football Luau fundraiser.

“Pelham has been good to us. I’m overwhelmed by everyone’s generosity,” Burnett said.

Hiring PHS grads and students, marketing local artists’ wares, stocking a hearty Panther inventory and giving to school fundraisers, I’d say Paige Burnett is using her Gifted Boutique to give back to Pelham. Drop by Gifted for a unique Pelham shopping experience.