Ready for the PHS ‘Love Class’ 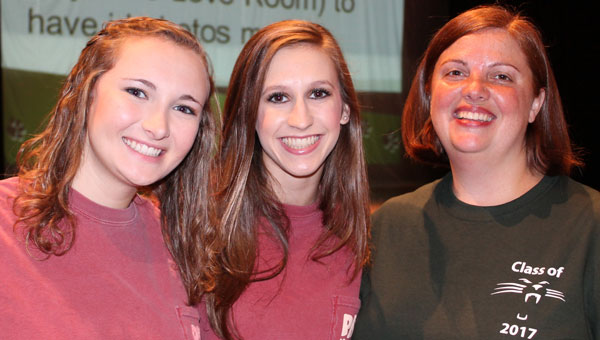 Pelham Mayor Gary Waters also welcomed students encouraging them to focus on their education this year and avoid distractions. Waters encouraged the students to make the most of every opportunity.

“I love the messages from both mayors. We have to focus on this year,” freshman Assistant Principal Michelle Bell said.

While we’re welcoming the Class of 2017, we know that they will be the graduating class of 2017 at two separate high schools. That makes this year particularly sweet. We’re celebrating the end of an era at Pelham High School — and the Class of 2014 has the perfect senior leadership for this challenge.

The Class of 2014 is our last united Pelham and Helena graduating class. Since they have the numbers 214 (like Valentine’s Day and my room number) in their graduation year, I nicknamed them the Love Class last year.

They seem to like the nickname—and it fits. Our new seniors are warm and welcoming. They’re great kids who’ve responded to the planned division of the school they’ve known with an admirable sense of unity and relief that they could stay together until graduation — with all of their friends from both cities.

As we anticipate more than 600 freshmen adding to the hallways, the fact that the Class of 2017 will soon need more space is evident; however, focusing on this year, embracing each day, preparing our seniors for graduation, and celebrating every milestone with a little extra zing is our mission.

Knowing this year is our last year to be together makes the coming school year even more of a gift. Seniors always know that at the end of their graduation year, they’ll no longer see their lifelong friends as a part of each school day. This year, every class will live with that reality. How fitting that the Love Class of 2014 will lead us through! At PHS, we’re ready for an incredible year.

Gifted gives back to Pelham

Paige Burnett, owner of Gifted, has an impressive selection of Pelham Panther and other unique gift items. (Contributed) By CONNIE... read more