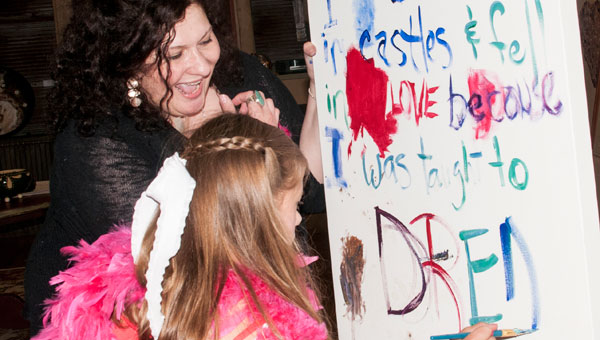 Laurie Kramer, an artist and teacher now living in Helena, has also worked as a teaching artist with the Cultural Alliance program. Here she and her Art-Partner, Grace Davis, approach the end of a recent painting session. (contributed)

“I slept in castles and fell in love because I was taught to dream” are the Taylor Swift lyrics that inspired artists Laurie Kramer and Grace Davis, age 11, to create their most recent joint work of art for VSA ArtPartners live auction and showcase to be held on Aug. 24 at LincPoint.

Grace has been a part of classes at VSA — a statewide organization dedicated to serving children and adults with disabilities and chronic illnesses through the arts — since she was four and Laurie has been Grace’s one-on-one art-partner for several years.

Grace’s mother, Laura Davis, told me, “The day that Laurie and Grace really bonded was the day Laurie let Grace paint her face.”

“Grace was reading at 22 months. As a former teacher myself, I sought to be very academic with her. On the Down Syndrome spectrum she is very high functioning, but I have come to realize that academics are not going to get her through life. We continue to work on her lifeskills — getting along with others — that is what is important to me now as I look to the future.”

Grace will enter Pizitz Middle School this fall. A highlight for Grace this year was attending a dance competition and dance seems to a be another natural outlet for her expression.

After Grace’s part of the painting was finished in the studio of Ice & Coal Gallery, she staged an impromptu recital, placing Laurie and me as the audience in chairs to watch her pivot to some other Taylor Swift songs.

“Its always a surprise what’s going to happen in class,” Laurie whispered to me. “She involves me in her play and right now she knows she’s a princess!”

“Our time together began with building a relationship and establishing trust. She has grown from being a little girl to identifying with a young pop star because she feels beautiful like Taylor Swift.”

Kramer will now add her own input to the auction canvas with chalk pastels. In past years, Grace Davis’s work has brought as much as $1,500.

Working out in rhinestones