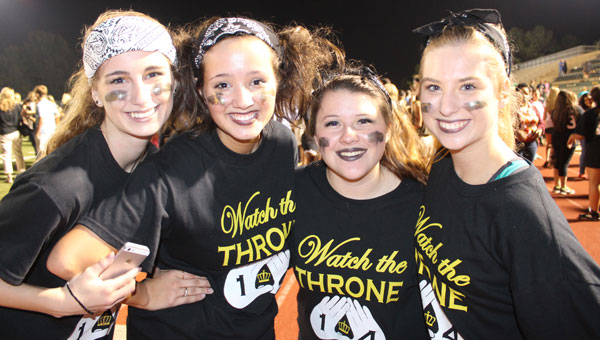 “The final score is 20-14. Are you kidding me? The winners are the Class of 2014,” Pelham police officer Carrie Bowman said to teachers while the senior class celebrated on the field following the PHS senior girls’ Powder Puff victory.

“My college English professor would be so proud that I found the symbolism,” Bowman said as she laughed. Seniors began making their way to the sideline for pictures and Bowman’s observation made the rounds among the kids. They were delighted with the numerical coincidence of the class of 2014 winning by 20-14.

Parents gathered to take pictures of their female football players. Pictures were needed to document their daughters as football players. These young women looked dramatically different from the male version of football players usually found on the PHS sideline. The girls wore Nike shorts over leggings to coordinate with their class T-shirt jerseys. They also wore pigtails and eye black covered with glitter.

“The best part about Powder Puff was all of the senior girls were united and cheering each other on. That unity was beautiful,” said PHS Senior Haley Giffin.

Although many rumors circulate that seniors win the Powder Puff game every year, Mattingly Dramer’s memories squelched that discussion this Homecoming.

“My sister’s junior class won Powder Puff. She was in the Class of 2012. The seniors were so mad,” Dramer said.

With a come-from-behind victory, the Class of 2014 senior female football team had to work for their win as they sealed the deal in the final seconds with a tie-breaking touchdown.

Soon, juniors humble enough to join the ranks were posing in the pictures as well. And then, the celebration was really taking place. For all the fierce foolishness of Powder Puff football aside, the real celebration is not a senior over junior victory; the true celebration at Pelham High School last week was homecoming.

“The highlight of my senior year so far was when all of the seniors at the game stormed the field and we were celebrating, hugging each other and crying. It was great,” Giffin said.

Pelham High School literary magazine staff and writers at the ASPA Fall Convention at the University of Alabama. (Contributed) By... read more