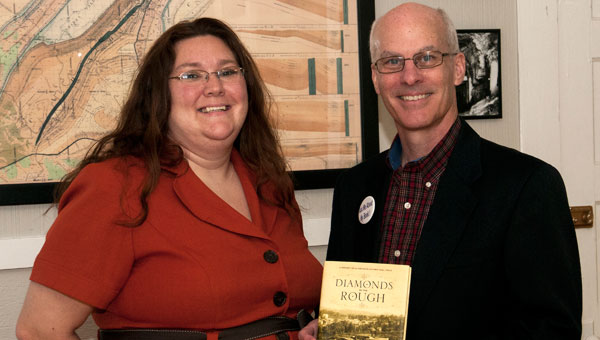 Dr. James Sanders Day, professor of History at Montevallo University, said he became interested in the coalfields he writes about in his recently published book, “Diamonds in the Rough,” back around 1987.
Day, a history professor at the University of Montevallo, read a footnote in a book that mentioned Joseph Squire. He later contacted Ken Penhale, former Helena mayor and historian, asking for more information about Squire.
“Ken was very generous sharing his papers and he has been a good friend. Today, it’s nice to see the Helena Historic Museum has become such as asset to the city,” Day noted at his book signing held at the museum on Sept. 28.
In the museum hangs the Map of Cahaba Coalfield and Adjacent Regions, dated 1890, carefully mapped and drawn by Joseph Squire, who came to Helena from Rochdale, England, arriving in the Helena/Montevallo area about 1859, via Rhode Island, Kansas and Nebraska, where he worked in mines as a foreman and superintendent.
“Squire received reports of extraction problems in Montevallo and he came here, though he continued to own property in Missouri River Valley,” Day continued. “Squire first worked for William Phineas Browne at Wilton, who I consider to be the coal mining pioneer of Alabama.”
“After about a year, Squire went to Browne’s competitor, the Alabama Coal Mining Co., that was then mining the same seam,” he added.
Squire later hooked up with Isaac Taylor Tichenor, minister of the First Baptist Church of Montgomery, who left the ministry and moved to the area known as the Blue Spring, which was part of today’s Alabaster.
Tichenor later became president of what is now Auburn University (1872-1882) then corresponding secretary for Southern Baptist Home Missionary Board in Atlanta in 1882.
“At this point, Squire and Tichenor are writing back and forth, and Tichenor’s letters are on Southern Baptist stationary,” Day said. “You can almost see them with their maps laid out, each working on tracking and naming the seams of coal.”
Meanwhile Squire moved his office near Buck Creek, where it remains today in dilapidated condition.
Both Penhale and Day, along with members of the Helena Historic Council, have begun a campaign to have Joseph Squire’s office relocated into Helena, where it can be rightly preserved as an integral part of Helena’s history.