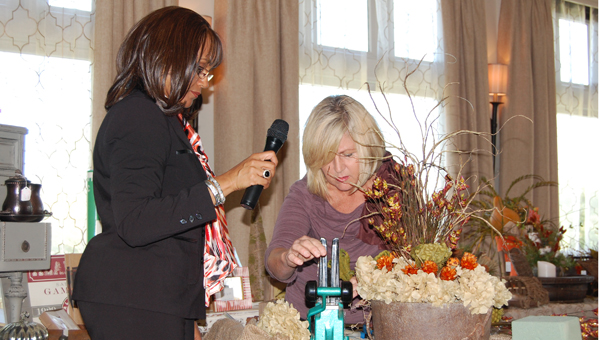 “I love fall,” said Thompson, cutting and placing flowers in an arrangement as she explained the art of to members. “The colors are so warm, and this is usually the time of year that people think you can use dried or preserved flowers.”

She also suggested reusing containers to make multiple arrangements, using as few packages of flowers as possible and providing her with a budget to help determine the amount of flowers needed for the arrangement.

Thompson’s business is one of about 70 booths located at Greystone Antiques and Marketplace, which is open seven days a week from 10 a.m. to 6 p.m. The marketplace also hosts ladies’ nights on the third Thursday of the month, when hours are extended to 8 p.m.

Thompson said she was attracted to the marketplace because she lives in Greystone, but she also said the Greystone Antiques and Marketplace goes beyond her idea of an antique shop.

“You walk in and you’re wowed,” Thompson said. “There’s a lot of new stuff.”

A Christmas Open House will be held Nov. 7 with doors opening at 3 p.m. Refreshments, music and door prizes will be provided from 5-9 p.m.