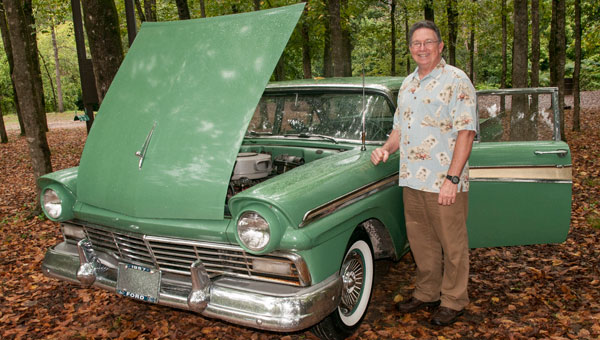 In 1967, Stan Stepleton was sporting a 1957 Ford Fairlane 500 around Albertville. Just recently he found and began restoration of the same model, a Cumberland Green with green basketweave fabric.

“The exterior is in fairly good shape; the interior shows some rust and age,” Stepleton said recently at the Birmingham Motoring Club event held in Helena. “I’m not restoring it to showroom quality, but to everyday driving condition.”

The car features a wrap-around windshield that was used in the Edsel, a Ford model that was named after Henry Ford’s son. Fairlane was the street on which Ford lived. The ’57 model had the front-opening hood as did the ‘57 Thunderbird. The Yankee Tri-blade-mirrors in Stepleton’s car are not original but from the same era.

The trunk is large and spacious, and as club members say jokingly, a measure of a fine car is how many bodies you can hide in it.

“Other additions are power brakes, an electric windshield wiper motor and the generator has been changed to an alternator,” Stepleton said. “This model cost $2,433 when new, which would be $20,242 in today’s currency.”

“I have one really good photo of my original car; it was named The Green Apple Crate,” he added. “My wife, Lynn, helped me name this one Miss Apple Perry.”

Miss Apple Perry also has a vintage Alabama tag, which adds to her charisma.

“I am a member of several clubs — Viper Club and Porsche Club. We say that the cars brought us together, but it’s the camaraderie that keeps us coming back,” he said. “We share business connections and personal exchanges — most of us would have never met otherwise.”

Viviani invites those interested in classic cars — European, Japanese or Italian — to check out the Birmingham Motoring Club events. This same event will be held at the Helena Amphitheater in 2014.