Health is the prize at Benefit Expo 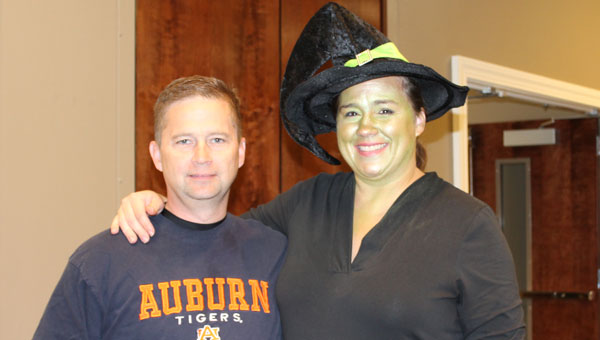 The City of Pelham held a Benefits Expo on Halloween. (contributed)

“Don’t know who could top that costume.”

At the City of Pelham’s recent Benefits Expo on Halloween, McMurray seemed the popular favorite for the employees’ Halloween costume contest winner. Those employees in costume revealed some pretty amazing creativity. However, David McCurry, training division chief with the Pelham Fire Department, was nowhere in sight. The rumors held that he was costumed as a superhero.

Many employees and retirees were participating in free vision screening, seeking out information about insurance benefits, having blood pressure readings and receiving flu shots. Taking advantage of the City of Pelham’s wellness screening offered at their annual expo allows employees to enjoy health and peace of mind as their prize as well.

“The City of Pelham does a great job of letting their employees know about the expo,” said Humana’s Holly Kitterman. “Being able to talk with employees one-on-one about their benefits is a great opportunity for us.”

“I came because I was invited,” said McAlister’s owner Rick McCoy. Providing snacks and drinks for the employees and vendors participating in the benefits expo was an act of kindness that McCoy was obviously happy to offer.

Many employees took advantage of the wellness screening and other offerings at the benefits expo.

“The place was packed when I was there,” reported Ballantrae general manager Butch Byrd.

Each fall the city’s annual expo draws out employees and retirees, offering them full access to screenings and their city’s human resources department, who are just as accessible a the vendors surrounding them as they all sit under the single roof of the Pelham Civic Complex. In addition to the many vendors, employees in their costumes really spiced up Halloween’s daytime dynamic.

Although no official winner had been declared in the costume contest at press time, superheroes seemed very likely to take the prize.