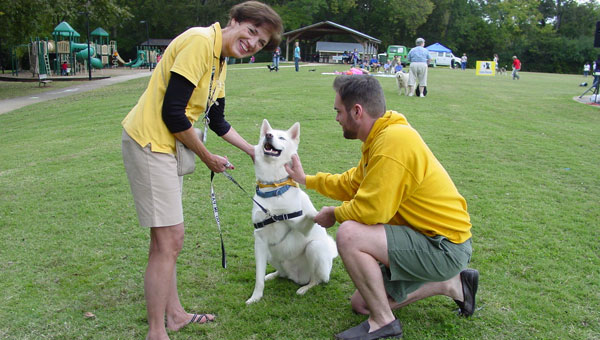 If there was a Montevallo “Canine Citizen of the Year” award, 3-year-old Cody (Pawlik) would be a shoo-in. He is a busy, busy and dedicated volunteer.

Cody’s owner, Michelle Pawlik, explained that together they regularly visit hospitals and rehabilitation centers where Cody provides affectionate and effective therapy, especially for patients who respond better to animals than people.

Cody also loves to visit schools, day-care centers and clubs where he and his human parent give educational programs about Hand in Paw, a Birmingham-based nonprofit; the care of animals or the relationship between animals and people. And he is almost a member of the Presbyterian Church where he provides “Life Lessons from Cody” children’s sermons.

Two years ago, Cody was homeless. Michelle found him, immediately fell in love, and quickly adopted him. After retiring from a nursing career, Michelle had been looking for a dog that could be trained as a therapy dog. She wanted to continue using her nursing skills by providing therapy as a volunteer.

It wasn’t long before Cody became an important member of her family. The large snow-white dog is of mixed heritage; Michelle thinks there was a “Casanova-Husky” back there somewhere because of his beautiful blue eyes.

Now Cody is also a well-educated dog, too, for he aced the rigorous Hand in Paw training and has been officially approved for the work he’s doing.

“A hospital visit from Cody and Michelle meant so very much to Nolan when he was so sick,” said Margie Hardin. “He loved Cody, and he and the doctors and nurses talked about the visit for several days.”

Michelle told of another touching incident when she and Cody were making a hospital visit. As they walked through the waiting room she saw a lady who seemed very upset, so she stopped and asked, “Would you like to pat my dog?” The lady patted Cody, gave him a big hug and turned to Michelle and said an emotional “Thank you.” Later Michelle learned that the lady had just received word that her loved one had died.