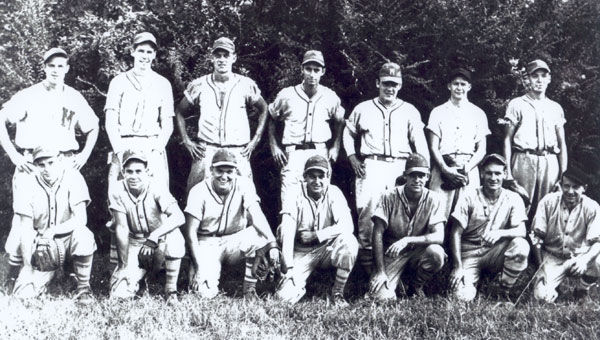 Pleasia Spears was excited when she was given a picture of Montevallo’s city baseball team dating back to 1946. She immediately began a search for the story of the team and the identities of the players.

The picture travelled the town and was checked by several of the players who were pictured there, but there was no real agreement, so the identities may be “best guess.”

The story was easier; Clyde Winslett, said that the he has good memories of playing on the team. He played for about seven years, which was most of the tenure of the team. Some players played for a year; some for several.

“Most of us were just home from the service after World War II, and we needed something to do,” said Clyde. “All of us had played baseball in high school, and we loved the game.

“Some were on the 52/20 program where they could draw $20 a week for 52 weeks from the government. Others were waiting to start college or looking for employment, and a few were attending Alabama College (UM) under a special provision for returning service men that allowed them to take classes at that all-girls’ school.”

Clyde explained that they practiced and played their games on the field next to the high school. They actually raised the money and volunteer labor for the lights, which gave Montevallo the only lighted field between Montgomery and Birmingham.

The team played against other town teams and some company teams. Those companies were hard to beat because they sometimes hired professional players.

The Montevallo fellows played for several years under the direction of various coaches. Those mentioned were Bob Galloway, Theron Fisher, Ferman Moore, and Glen Bashore.

Catherine Legg may be reached at clegg2@bellsouth.net.