By Phoebe Donald Robinson/For the Reporter

COLUMBIANA – Dell Moody has been named the grand marshal of the 11th Annual Columbiana Christmas Parade on Dec. 5.

Festivities will begin at 5:30 p.m. with Christmas music sung by Rob Robinson at the Christmas tree in the heart of town on Main Street. Dream Makers dance team, led by Jenny Lespi, will perform at 6:15 p.m. 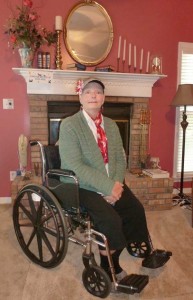 The parade begins at 7 p.m. and its theme is “A Southern Experience.”

The Columbiana Merchants and Professional Association chose Moody, a Columbiana native, as this year’s grand marshal. Moody graduated from Shelby County High School and the University of Montevallo. She and her husband, Freddie Moody, have one son, Ethan.

Moody taught English at Shelby County High School for 28 years and seven years to at-risk students at the Shelby County School of Technology. She taught more than 5,000 students in her 35-year career.

In 2003 she was diagnosed with a rare type of breast cancer in her neck. After radiation and chemotherapy, she had a time of remission until 2011 when the cancer returned in her liver. She has chemo treatments every Monday.

“I was the only case of polio in Shelby County in 1954, six months before the vaccine came out,” she said. “I have always been on crutches. Some people take their good health for granted. I have always been thankful for my life, but cancer has made me even more thankful. I was so thrilled and honored to be asked as the grand marshal.”

Awards will be given in four categories: Most Original, Best Christmas Spirit, Best Theme and Best Overall. The awards will be announced during the Dec. 17 council meeting at 7 p.m.

The parade ends with Santa Claus’ appearance, and then Moody will light the Christmas tree on Main Street. Santa will be available for pictures after the parade. (Bring your own camera.) Hot chocolate and cookies also will be available.