Playing for pride at PHS 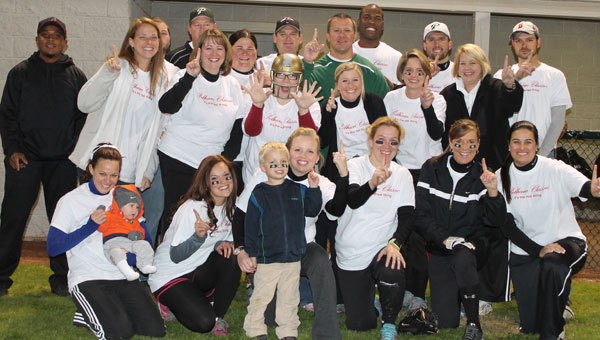 Many members of the PHS Faculty Family, along with a new intern reported to be a great softball player, pose before the Pelham High vs. Helena Elementary Faulty game. (Contributed)

“Seriously, if he strikes out, I’m gonna lose it,” Sabrina Tutchtone said as she glared at the dugout inhabitants behind her. Was that a smile playing about her lips—or the beginnings of hysteria?

Never have I seen a coach so serious with a team so confused. Tutchtone, better known as Coach T by students, is starting her second year at Pelham High School.

“Who is the batter?” PHS theater teacher Jamie Stephenson asked.

“I have no idea,” I said. “Why are you wearing a football helmet?”

“Ryan Dye talked me into playing in a teachers’ volleyball fundraiser a few year ago where they spiked the ball on my head,” Stephenson said. “Safety first—now, I wear a helmet.”

The batter walked. Tutchtone eyed him with disgust stomping angrily away.

Coach T called time to substitute Stephenson as a runner. The next batter advanced Stephenson to second—where she earned an out for playing off base.

Tutchtone lost it—arguing with the ump, waving her arms wildly—and drawing uproarious laughter from her student-spectator crowd. This faculty softball contest transformed Judy Hayes field into a stage for many faculty actors and actresses.

The game ended in a tie.

“We were arguing about whether to play a tie-breaker,” PHS math teacher Alisa Creel said. “And we noticed that our student crowd was leaving.”

Teaching at Prattville High for 17 years, Coach T is happy to be at Pelham High now.

“The faculty is so welcoming and helpful at Pelham and the students are amazing. This year honestly feels like I have found a home again,” Tutchtone said.

Working hard and playing hard, Sabrina Tutchtone is a wonderful addition to the PHS faculty family.