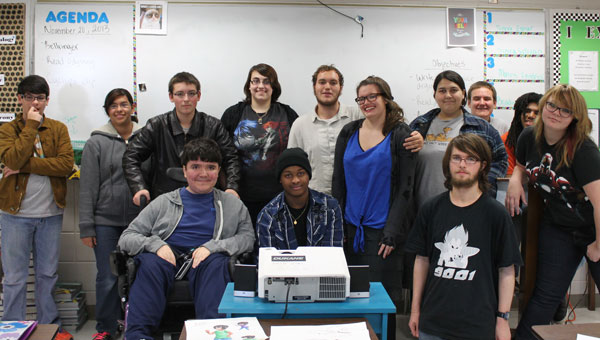 Fictional characters emerge frequently from the minds of Pelham High School’s creative students. Thanks to the newly formed PHS Anime Club, some of these characters are coming to life in an entirely unique way to create an animated adventure.

The newest member of the PHS English faculty, Katie Borland, sponsors the club, which meets Wednesdays after school.

“One of my students, Jordan Halstead, asked me if I have ever heard of anime,” Borland said. “I had watched a few anime movies before, but I knew that there was a very involved anime culture that I didn’t know much about.”

While anime is defined as a specific style of Japanese animation, several of the club’s members said they consider the word a shortened version of the word animation. However, this group is quick to voice diverse opinions.

“The diversity of the people in Anime Club and the skills I’ve learned from those people” are what sophomore Erin Patterson enjoys most about the group.

Consisting of freshmen through seniors, the PHS Anime club has found some upperclassman leadership.

“I enjoy that the group is very energized and very judgment-free,” said junior Devin Wilson.

Seniors Toni Garner and Belle Griffin have worked together on several children’s books projects. Their teamwork on the club’s anime project, along with the input of many others, is producing yet another awesome project. Always the artist in search of a project, Garner said, “I heard about the Anime Club and I squealed like a fan girl.”

Her collaborator, Belle Griffin has finished the script for the animation project while Toni is finishing up the original art. Several members are adding color and voice over artists wait anxiously for the actual animation to begin.

“This has been an amazing project and learning experience for all of us,” Griffin said.

The group is anxious to see their completed project and working towards that goal.

“As a group, it has been interesting seeing my kids organize themselves into having a common creative goal and purpose,” Borland said.

Playing for pride at PHS

Many members of the PHS Faculty Family, along with a new intern reported to be a great softball player, pose... read more