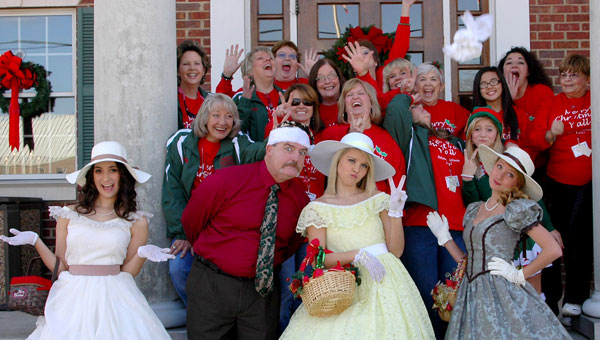 The Helena Christmas Parade Committee is looking forward to this year’s parade. (contributed)

The route along Hwy 261 will no doubt once again be lined with enthusiastic holiday celebrants and Christmas lovers of all ages on Saturday, Dec. 7 for Helena’s 43rd Annual Christmas Parade. “A Helena Christmas Past, Present and Future” is the theme this year and Ken Penhale will be honored as grand marshal.

Starting time is 1 p.m. with an Elf Run. Meanwhile, the tried and true Christmas Parade Committee, headed by Joy Childers and her corps of experienced helpers,

will have organized the chaos.

“I have so many memories about our Christmas parade. We moved to Helena in 1976 when my children were grade school age. The town was only 600 or so people. It was the one time each year that the community would all come out,” Childers said.

Childers’ family first participated in the parade in 1978. Her neighborhood, Dunham Farm, made a float. The theme was Babes in Toy Land, and all the children wore dance costumes.

“The parade was so short that we went through twice,” she recalled.

Her family’s enthusiasm for the parade didn’t wane over the years.

Childers said the parade started when Pastor Holmes at Helena Methodist Church thought it would be “a great way to show community spirit and the spirit of Christmas.”

The first committee was very small, but many of the original members are still on the committee today, including Shirell Vansant, Teressa Moore, and Michelle Hamm.”

“We did Christmas in the Park and the parade all in one day. We were much younger then and pulled it off, but had to decide the following year to do one or the other. The Christmas Parade won out and I have been head of the committee ever since,” Childers shared.

Childers, it is clear, never loses her enthusiasm for pulling this event together, and we thank all the volunteers of the day for providing this tradition annually for our small town with a big heart.