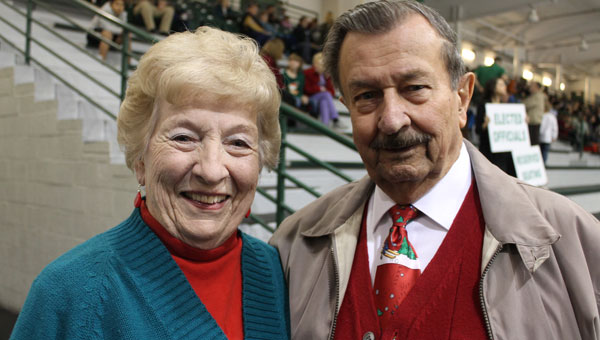 Dick Paxton and his wife, Gloria, before the Pelham Christmas tree lighting ceremony on Dec. 2. (Contributed)

Streaming into the city of Pelham’s Christmas Tree Lighting, the crowd was greeted by volunteers distributing sparkling silver Christmas ornaments against the backdrop of an enormous Christmas tree rising majestically from the ice.

School children hurried to find their choirs and the PHS Jazz Band began to fill the air with festive Christmas music.

Longtime Pelham Senior Center volunteers Gloria and Dick Paxton were among the first I wished a merry Christmas.

“Are the volunteers serving goodies after the lighting tonight?” I asked.

“Not tonight,” Gloria Paxton said, pointing towards Dick. “Dick is lighting the tree!”

Breaking into a huge grin, Dick Paxton said, “I was supposed to light it once before and I got sick. Tonight, I have my second chance.”

Dick and Gloria were quickly onstage as the festivities began. Mayor Gary Waters opened the ceremonies. Brother Mike Shaw’s message, the musical performances and the incredible skill of each ice skater captivated the crowd. After so many years of Pelham Christmas tree lightings, the event continues to resonate with hometown wholesomeness and holiday joy.

City employees work diligently organizing the tree lighting, but they are vastly outnumbered by volunteer musicians, Beautification Board members, PHS Student Ambassadors, Senior volunteers and other groups who give their time to create a sparkling, memorable night—such as Dick and Gloria Paxton, who serve others volunteering at so many Pelham events. In addition to his volunteer service, Paxton’s military service sets him apart from the crowd.

“I joined the Navy in January of 1945 at 17 after graduating from high school a semester early,” Paxton said. He traveled to New York, California, Honolulu and finally to Saipan in the South Pacific, where he worked as a Navy SeaBee before returning home.

In January of 2000, Paxton relocated to Pelham where he began serving the community in many capacities. Paxton was asked to light the tree representing all veterans.

“I am honored to represent Pelham’s veterans,” Paxton said.

Theatre winning all around