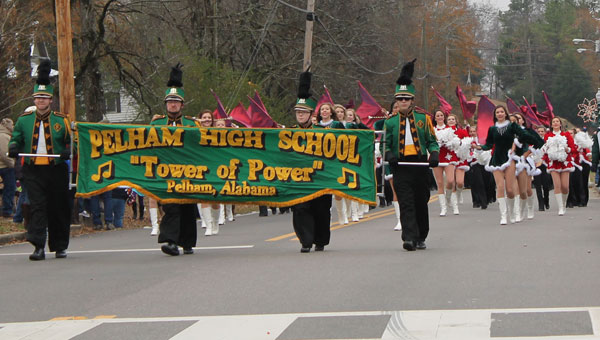 This year’s Helena Christmas parade marked the final parade that will feature the Pelham High School Tower of Power Marching Band as the band featuring both Pelham’s and Helena’s high school musicians. PHS students are adjusting to the reality of the quickly approaching split when Helena High opens in the fall of 2014. Listening to students speak about the split is disconcerting.

“It took 45 minutes to prep for the Christmas parade,” Ben Creel said.

“We could do a joint Christmas parade marching band,” said Trey Smith. “But the visuals—I don’t know—it would be harder for them to coordinate. Could two schools get together to practice?”

“Pelham and Helena not marching together has been on my mind since the beginning of marching season,” Creel said wistfully.

“We’re too big,” Smith said. “We won’t have the same sound when we split, but we’re too big now. There are kids in the band this year that I don’t know. That’s too big. Does that make sense?”

Trey Smith and Ben Creel make perfect sense. PHS students are struggling with the upcoming split into two high schools. The juniors that I’m teaching now will be the first Pelham and Helena classes to graduate as single cities.

Jennifer McCoy Rosenow is assistant color guard sponsor and a PHS math teacher. A few years ago, Rosenow, a Pelham native, was color guard captain and her friend Vincent Stephens, a Helena resident, was the PHS drum major. The two friends attended the same college in Mississippi. Both are back in the area.

Like the friendship between Rosenow and Stephens, the friendship between Pelham and Helena has been a symbiotic working relationship; however, Smith is right—we’re too big. Simply getting students onto and off of campus has required creative traffic design—and lunch shifts are complex. Shorter lines and longer lunches will be welcome changes. Marching on with friends missing from our daily lives will be unwelcome changes.

The memories remain—while time marches on.

Connie Nolen is a community columnist for the city of Pelham and can be reached at CNolen@Shelbyed.k12.al.us.