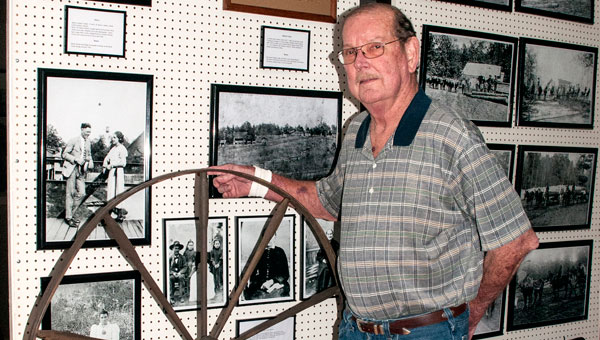 Charles Griffin, whose family goes back five generations in Helena, has donated the spinning wheel and loom belonging to his great-great grandmother along with accompanying photos of family members, to the Kenneth R. Penhale City of Helena Museum.

Verinda Ann Arnold Little, 1808-1910¬, survived all but two of her eight children. She lived on her farm well into her 90s often walking over a mile to visit a nearby daughter.

“Grandma” Little died at the age of 102 at the home of her son-in-law, John W. Cost, in Elliotsville. Her funeral was held at Harmony Church in Helena.

This spinning wheel was kept by Griffin’s grandmother, Missouri Thomas Fleming, who was raised in her grandmother’s home, and eventually passed to his mother, Bertie Wyatt Griffin.

The spinning wheel has been meticulously cleaned and refurbished by James ‘Bubba’ Sides for display on the lower museum level.

Griffin also preserved a beautiful large double-string hammered dulcimer (also dating from 1830) that was played by his mother. About four feet long, the story is that it was made by casket makers of the day, who would make instruments in their spare time.

Charles Griffin previously donated an extensive arrowhead collection to the museum all found at Buck Creek near the amphitheater and trestles.

Collecting bits of history has been his life-long interest. “I began as a kid in my own yard,” he said. “I spent a lot of time looking down, but you get to a place where it’s more instinctual.”

“It has always fascinated me to know the age of a relic, who used it and how it was used. I told my wife, I’m going to do this until I get tired of it, but I have never grown tired of it. I’ve just run out of help.”

Until 2006, he was an active hunter in Savannah, Tenn., and in Arkansas and Missouri along with three of his friends. These friends all died from cancer in one year and Charles confesses this slowed him down and dampened his enthusiasm.

His oldest relic found dated from 1105 BP and a 13-foot, four-inch dugout he found is now displayed in museum in Georgia.