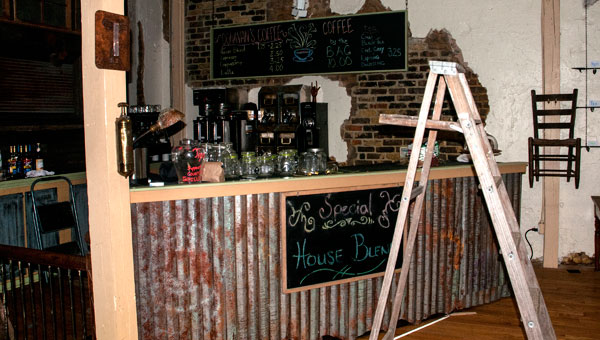 The movie set coffee shop bar remained in Ice and Coal after filming ended, waiting to be dismantled. (contributed)

It was day one on the film set of the movie known as “Coffee Shop,” directed by Dave Alan Johnson.

Waiting as extras were about 25 people, including Charlotte Brunnum, Kim Powell, and Lisa Rogers, who appeared last year as extras in “Mom’s Night Out.” Rogers was chosen to play the hostess in the scene, and Brunnum and Powell were diners at tables in the background shots.

All three women said it was interesting to go behind the scenes of a movie and watch how it comes together in the end.

Locals James “Bubba” and Marion Sides and Lora Lunsford were also placed as diners at a table nearby until about 2 p.m., when the entire set broke for lunch.

Only Lunsford had the patience to wait until 8 p.m. when their table was filmed in a final take, and by then, she had crocheted an entire scarf. Kate Wilson, a local artist, was in the scene earlier, serving briefly as a double for star Laura Vandervoort as lighting was blocked.

“It was a surreal, intense, and chaotic experience. So much was happening at once, but when the cameras started rolling, everything became quiet and serene,” Wilson recalled later.

Theresa Preston knew about the coffee shop (most recently LaReunion) in Helena as that is where she worked while co-writing the script for “October Baby,” which was co-directed by Shelby County natives Jon and Andrew Erwin.

As filming continued through the snow/ice storm days, Helena residents brought blankets and pillows for the roughly 55 crew members who had to remain in the adjoining four Old Town buildings. Kevin of Zou’s Kitchen returned to his restaurant to prepare meals for them after their caterer cancelled.

Much of the film was done in Old Town, where Old Town locations served as a restaurant, a bank, an apartment and a coffee shop, with the remainder filmed in Fairhope.

Jeff and Rosalie Oetting look to continue remodeling their Old Town spaces with plans to quickly reopen Ice and Coal Gallery. They expect The Coal Yard, the adjacent jazz and wine bar to be open in May.

Snow angels help out in city’s time of need