Who do you love? Saying it big on Main Street 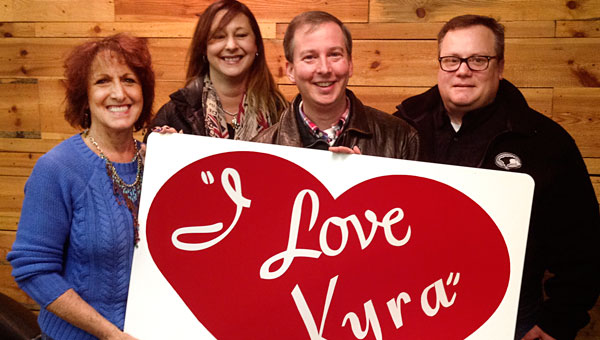 When “I Love Lucy”-style heart signs with personal Valentine’s Day greetings began appearing above Old Town sidewalks, it was the culmination of the Helena Arts Council’s project originally conceived by Tim Wolfe, who teaches at Samford University.

Tim met his wife, Karen, in college in Tennessee. They dated for three years and married while in graduate school at Samford.

“I asked her father’s permission to propose and with his blessing, did so at his birthday party,” Tim said.

Tim arrived at the party with a six-count package of Cracker Jacks—one of which held an engagement ring and proposal he had fabricated inside the pack. Her answer was indeed, “yes”!

“Twenty-two years and four children later,” Tim affirmed, “I would do it all again.”

“I thought a sign on Main Street would be a nifty thing for a Valentine’s Day surprise. And, it was. She loved it.”

Monica and Rick met through an online dating service.

“He came to Helena to meet me in his PT cruiser and I made fun of it,” Monica said, “but he still took me to lunch at Incahoots. Then we walked over to the leather shop (no longer there) and bought me my first black leather jacket.”

“I felt amazing in it. We have been riding motorcycles everywhere ever since, traveling together for the past 10 years. Rick is a wonderful man, recently retired from NASA, and he, too, loves his sign!”

The story of Lane and Amanda: “Our first date was lunch at San Antonio Grill in Helena and as we talked, I realized that we held the same beliefs and family values and morals,” Amanda recalled.

At the time, Amanda was a single mother with a 2-year-old son.

“He and my son warmed to each other very quickly and Lane accepted him as his own,” she said.

Lane and Amanda will be married seven years on April 27 and now have a daughter as well.

“Life brings change over time, but it’s amazing how we are still in love,” she said.

The Arts Council plans to offer these customized Valentine’s Day greetings again next year. The cost this year was $50 and the recipient takes his or her sign home at the end of February.