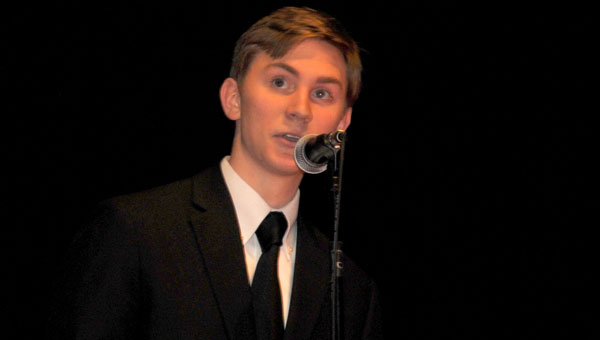 Matthew Hill, a Pelham High School senior from Helena, was chosen as emcee for the 10th annual Write Night for his stage presence gained in three years of theater class. He co-emceed with Haley Giffin and Bailey Stephens.

Write Night 2014 had the largest ever attendance and Hill credits the theater tech crew, sponsors, and parents who all helped make it such a success.

“I got into performing just helping as an extra in my sophomore year, then realized how much I enjoyed it,” Hill explained.

“In “Arabian Nights,” I first found I could be funny on stage and enjoyed playing multiple characters.”

Hill tells of an indelible memory created during a practice scene in which he was having trouble taking his character from happy, high energy to a very sad demeanor.

“I needed to play it in a funny way. Mrs. Stephenson was helping me, and it was the moment I ‘got it,’ when it clicked in my head, when I knew how to play the character.”

“The satisfaction comes when your fellow cast members laugh, and ultimately, from the laughter and interaction with the audience.”

This year in Theater III, students took their production of “Almost Maine” (a series of four different love stories set in Maine) all the way to second place in state competition.

“That entire ensemble was amazing,” Hill said. They are now preparing for upcoming show, “The Foreigner,” which will be presented just prior to spring break.

Hill will attend Auburn and major in computer science and says he definitely plans to be involved in theater there.

“I’d love for everyone to come out and support the PHS Theater Department whenever they have the chance. Everyone will be impressed with the talent that is offered.”

Who do you love? Saying it big on Main Street