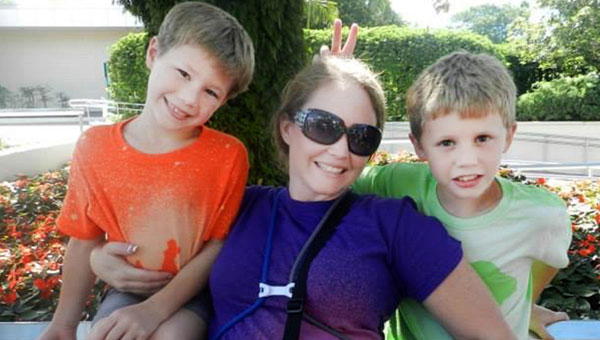 Mari Collins with her sons, Austin and Logan. Mari was recently diagnosed with cancer, and friends are sponsoring a ride to raise funds for the family. (contributed)

On the day I spoke with Mari Collins, single mom and mother of Austin, 9, and Logan, 7, I learned that she was back in her position working in the Publix deli after receiving chemotherapy the previous day and on only two hours of sleep.

Collins was diagnosed with breast cancer on October 22, 2013, and had a double mastectomy on Nov. 11. She was released to go back to limited work the third week in December.

“Under the expert and kind care of Dr. Winchester at St. Vincent and oncologist, Dr. Bondley, and the loving support of my parents Obie and Cissie Moore and sister, Toni, I will complete my eighth chemo treatment on March 28 and then begin six weeks of radiation,” Collins said. “During the holidays, I received several financial gifts from my co-workers, my family and even a church where I knew no one.”

She was also chosen as the Publix employee in this region to receive Christmas gifts, which helped her take care of Christmas for her boys.

Friends Amanda and Lane Channel have also put together the Ride for Mari event on March 22.

Channel said she and her daughter Haley, 6, were shopping at Publix and stopped to chat with Collins. Without any prior knowledge, Haley spoke up to Collins, “Do you know what Jesus is doing right now? He’s healing people.”

Collins recalls how touched she was. “It was so unexpected. I cried for an hour—children just know, it seems,” she said.

“On the day after Christmas,” Collins shared, “I let my boys cut my hair very short, as it had started falling out. Losing my hair was more traumatic than I was prepared for.”

The following day her aunt shaved down to her scalp. Then, Austin jumped in the chair and said, “Shave my head, too.”

Tracy Wyatt, deli manager at Publix, trained Collins for a future deli manager position during post-chemotherapy hours when she was released only to do deskwork.

“Through it all, I know God is in control and he has a plan for all of this,” Collins said. “You can never know who you may touch in any given situation. I thank God every day for my family and friends who have supported me in this journey.”

What: Ride for Mari

Details: Entry fee of $25 will include snacks and drinks provided by Publix. All proceed will go to Mari Collins and her sons.