Helena dam disappears for a day 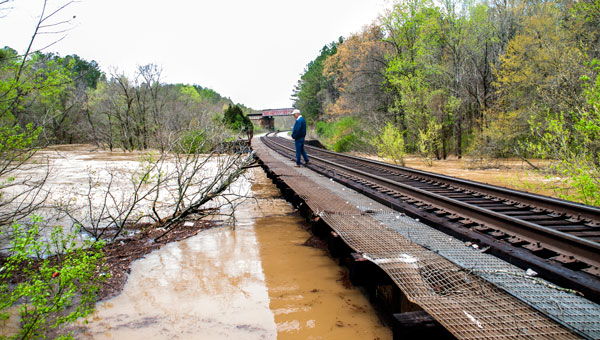 At noon on April 7, Ken Penhale views floodwaters rising to the underside of the railroad trestle just west of Old Town Helena. (Contributed)

The rising waters of Buck Creek caught the attention of everyone in Old Town after Helena received almost 7 inches of rain overnight on April 6-7.

Ron Holly, aka Major Dundee, arrived at 5:30 a.m. to his usual quarters in the caboose and realized that he would be unable to remove the Helena Farmer’s Market tents and tables stored onsite at the Amphitheater across Helena Road.

“It’s 2 feet into the concession stand now,” he said at 9:00 a.m. “I’d say we’ve lost the freezers and all the electrical equipment. And the picnic tables and playground equipment are probably gone, too.”

Only the top 2 feet of the wrought iron gate that leads to the back of the amphitheater were visible.

Up the creek where the waterfall is usually seen, the gushing muddy waters had obscured the dam completely. Limbs, trash and a wide variety of sports balls were rapidly moving onward to the Cahaba River.

Areas had been roped off by police and Officer Morgan was keeping watch, but curious onlookers and television cameramen arrived throughout the morning with cameras and phones. Even the children on the school buses were pressing their faces to the windows and taking photos as they crossed the bridge on Helena Road.

Local historian Ken Penhale noted that this was not a record-setting flood, as on July 14, 1872, written documentation says, “Buck Creek rose at a point opposite the crossing of the Atlantic Birmingham & Atlantic (sic) Railroad to a height of 14-and-a-half feet above the ties.”

This level would have been well upon the lower part of Second Street, likely flooding the buildings adjacent to the tracks. Rumor has it that the contents of those buildings on the lower floors were swept away. The railroad tracks have been gradually elevated about three feet over past decades.

Locals observed that over the years, there have been drownings in Buck Creek, and there are areas prone to sucking whirlpools, so we are counting our blessings for no such losses with this rainy spring surprise.

Woodman supports Helena in many ways