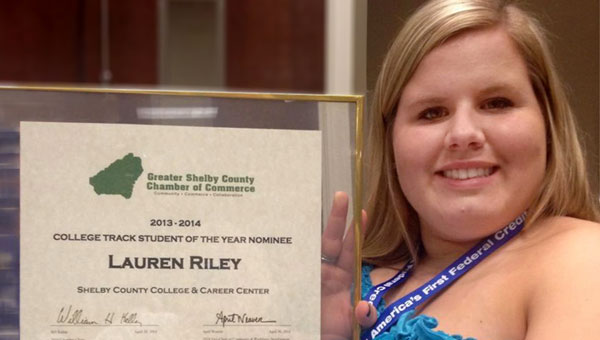 Lauren York Riley was chosen as one of nine Star Students in Shelby County. (Contributed)

Hunter Savage, a Helena senior at Pelham High School, has been active in the PHS Theatre Department, working on every show since she was a freshman.

Last year she was a child of the Holocaust in the production of “I Never Saw Another Butterfly” and was a stage manager/assistant director for the spring production of “Steel Magnolias.”

“This year, Hunter was a lead in our competition show ‘Almost Maine,’” said PHS teacher Jamie Stephenson. “At our district competition, she won Best Actress and at state, she was named as an All Star Cast member.”

“She is a hard worker and a leader in the class and also on our Thespian Governing Board, which is the governing board of troupe 6004 of the Pelham High School Thespian Honor Society,” Stephenson added. “Hunter is a wonderful example of what an arts education can help students with. She is motivated, creative, disciplined and has a different perspective of the world. Her arts education has helped her refine those traits and learn how to use them in every aspect of her life.”

Hunter’s parents are Nikki and Aaron Farmer, and they, too, are proud of her future plans to attend Vanderbilt University and study psychiatry. Hunter will always be a theatre lover, even as she embarks on the next chapter in her life!

Lauren York Riley was chosen as one of nine Star Students in Shelby County.

Lauren has chosen an alternative career path— she loves studying an object, figuring it out and using her hands to create something new from it. That is how her passion came to be welding.

She was the only female in her welding class at the Shelby County College and Career Center this past year and twice chosen as an ambassador for the University of Alabama’s Early College Program.

“Lauren has attended University of Alabama since her sophomore year and is now three hours away from completing her freshmen year studies,” said her mother April Grubbs Olive.

“As a member of the ACIPCO Engineering Explorers, I got to learn about different types of engineering careers,” Lauren said. “This fall I will attend the University of Alabama and major in metallurgical engineering.”

Congratulations to both of these outstanding young women, who have made their way in a not-so-usual way in our modern world!

By LAURA BROOKHART / Community Columnist This springtime event is always anticipated by the community and when the carnival lights... read more