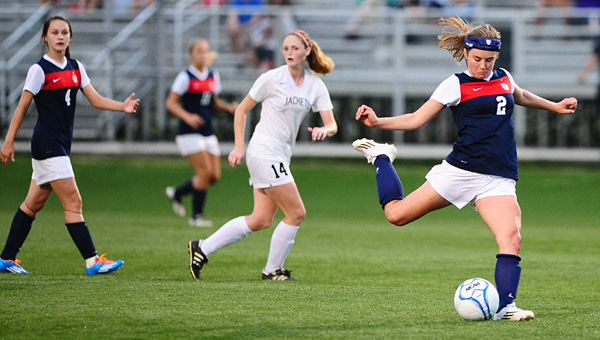 Oak Mountain’s Julia Buckner fires a shot into the goal during the May 9 game against McGill-Toolen. (Reporter Photo/Jon Goering)

HUNTSVILLE — The Oak Mountain girls soccer team is one win away from an undefeated season — and a state championship.

The Eagles used a big second half to take down McGill-Toolen, 4-1, in the semifinals of the AHSAA Class 6A state soccer championships.

The Eagles came out applying pressure early, finally breaking the scoreless tie when Alexandra Dunn put a shot in goal at the 16:16 mark to take a 1-0 lead.

Both teams played strong defense for the rest of the half, as the Eagles took the one point lead into the half.

The second half saw the Eagles break down the Yellow Jackets’ defense, as Julianne Jackson put a shot past McGill-Toolen keeper Eva Knapstein less than two minutes into the half to give Oak Mountain a two-goal lead. Julia Pack added a score off a penalty kick with 24:57 to go in the game to put the Eagles up 3-0.

The Yellow Jackets ended the shutout less than a minute later with a goal, but Oak Mountain’s Julia Buckner added a fourth and final goal for the Eagles 17 seconds after to go up 4-1.

Neither team scored again, and the Eagles secured a spot in the finals against Mountain Brook with the win. Head coach Pete Dakis said his team was looking forward to the challenge of playing for the title.

“We played (well),” he said. “(McGill-Toolen was) ready for this game. This team is resilient, and we always find a way to win at the end. We hope to do it one more time.”

The Eagles will once again face Mountain Brook in the finals, falling last season 2-0 to the Spartans. The rematch will take place at 12:30 p.m. at John Hunt Park in Huntsville.

By DREW GRANTHUM/Sports Writer HUNTSVILLE— The Indian Springs School’s soccer team is one win away from an AHSAA Class 1A-4A... read more