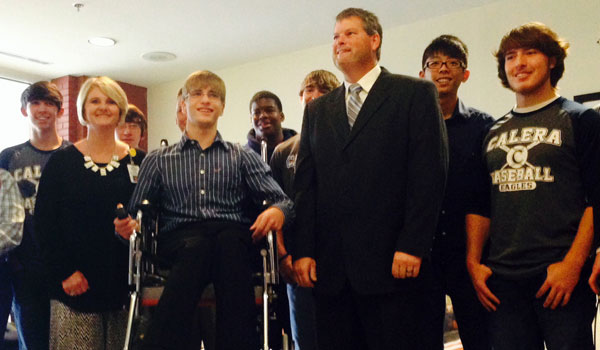 ALABASTER—When Brian Copes’ wife, Angel, saw that Project Search student Mikee Harve was having a hard time reaching office supplies on high shelves in his wheelchair, she naturally turned to her husband for advice.

Brian Copes, who was named as one of five Teachers of the Year by People magazine, has helped high school students at Calera High design prosthetic legs, arms and a hydraulic power plant.

However, Copes told his wife that his class did not have time for the project, so Angel was “amazed” when the class showed up to unveil the wheelchair, which lifts and lowers at the push of a button, at Shelby Baptist Medical Center on May 15.

“This is amazing,” Angel said. “That’s all I can say is ‘wow.’ I’m just so proud of these students that they took the initiative to go above and beyond.”

The lifting wheelchair works with a scissor lift system, which opens and closes to create an approximately two foot lift, David Lawrence, a ninth grader at Calera High, explained.

“We had about five ideas that didn’t work,” he said.

Those failed ideas were the best part for Brianna Meacham, another student who worked on the project.

“Failing to find it (a solution) each time did more good for it because we had to keep thinking. It was not easy,” she said. “We learned more from that, though.”

Evan Majewski, who demonstrated the wheelchair for the crowd who attended the unveiling, said the class spent “almost an entire semester” working on the wheelchair.

After the demonstration, Copes opened the floor for questions about the project, and when asked if he had plans to patent the designs, he said there were no plans “at this time.”

“Patent lawyers are expensive,” he joked, and said that teaching “community service” was his primary goal.

Police: ‘No reason for alarm’ after Navajo Hills incident

The Alabaster Police Department reported the public is not in danger after an incident in the Navajo Hills neighborhood. (Contributed)... read more