A pleasant surprise at HES 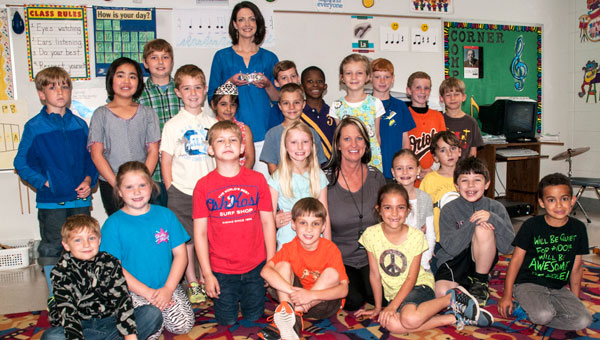 Downs’ mother, Susan, was calling to say that Deidre (now Mrs. Andrew Gunn) would like to visit Ashley’s classroom.

Big smiles and waves greeted mother and daughter, and Ashley arrived with a gift bag containing the newspaper column, parts of which she read aloud, and a red rose for Ms. Deidre.

Curtis Wentworth, Ashley’s father, said his daughter was “on cloud nine” this day, a sentiment echoed by Ashley’s classroom teacher, Pam Clay. Clay and I had discussed just last week this very idea of getting the two together at some future date.

In introducing Dr. Dunn, Principal Cooper noted, “I would say that Ms. Deidre is someone who demonstrates persistence — one of the seven habits of mind that we encourage the children to practice.”

Currently a resident physician in obstetrics and gynecology at UAB Medical Center, Dr. Dunn has been an advocate for children and used her title to raise awareness and research funds for pediatric cancer.

Ashley brought the sashes from her costume for Dr. Deidre to autograph and Dr. Deidre brought her real Miss America Crown for Ashley to wear for a photograph.

As other classmates shyly expressed an interest in the crown, Dr. Deidre began letting them also have the experience of trying it on. This resulted in a most unusual procession, as even the boys in the classroom were intrigued, of every child posing for a photo being “crowned” by the former Miss Alabama and Miss America.