Lit Mag goes down to the wire 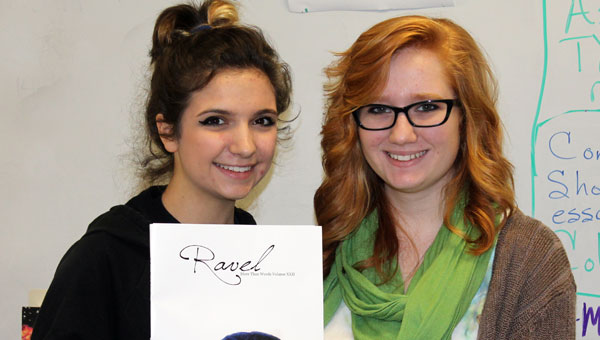 “Are we sure that’s the title? Is that the right word?”

“Should we take another class day to discuss?”

“Sam says the word has different meanings. We should think about that.”

This year’s PHS Literary Magazine editors-in-chief throw these lines around so quickly that no one is sure who said what.

“Sam graduated last year,” I say. “You are the editors. It’s time to make this magazine. Your word, your title is Ravel. It’s the one word everyone approved. Go with it.”

They know Ravel is right, but they need a push. Once the staff begins making the magazine, designing pages, choosing images, fonts, and their individual page spread colors, Literary Magazine class becomes more of an individual pursuit and the incredible teamwork effort of collaboration begins to subside.

When we had this conversation in March, these editors were having a hard time letting go. Wanting their magazine before year’s end, having lost so many days to snow, they shifted reluctantly from collaboration to individual creation.

One of three editors-in-chief, PHS junior Maggie Smith compares getting the magazine to Christmas morning. Holding the magazine is receiving the vision, the dream, as a concrete product. Receiving that magazine means that the work is done. Once any dream is realized, we must move on to the next dream. Moving on is tough.

“The magazine’s concept fits our school’s situation perfectly this year. It is all about Ravel—to mend together but also come apart,” Editor-in-chief Sarah Sansom says.

Sansom and Smith started Lit Mag as freshmen. They’re both legacies whose older sisters were editors. PHS Senior Kane Agan is the final editor-in-chief who also joined the staff his freshman year. He will be attending UAB next year. Together for three years, surrounded by staffers they’ve worked with for multiple years, this group exemplifies Ravel as much as the school.

The magazine proof comes in the morning. The PHS Lit Mag Ravel edition will be at school next week. We’ll have copies at graduation. A year of great art, photography, writing and design all packaged for PHS arrives.