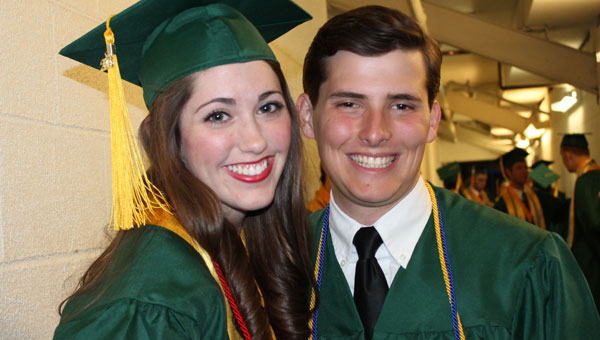 “What I love about our class is that we’re all on the same team,” PHS Class President Jessica Lingle said during her graduation welcome speech. “We’re all Pelham Panthers.”

Lingle’s remarks reveal this group’s unconditional affection for each other and their school. These graduates mark the end of an era at PHS, and they’ve made their mark with panache.

A PHS broadcast class survey revealed that 90 percent of PHS 2014 grads are going to college. Approximately 10 percent will attend the University of Alabama while 5 percent head to Auburn. Jeff State will host 21 percent and UAB will host 13 percent. PHS sends single digit percentages of PHS students to Montevallo, Troy, Jacksonville, the University of North Alabama and many other in-state and out-of-state colleges this fall.

Jessica Lingle plans to attend Appalachian State—a college so environmentally aware, barefoot and Lingle-like that I feel sure Lingle was born at App State and shipped away to the suburbs of Birmingham as a baby to see if she would find her way back. Lingle’s people are at App State and she is ecstatic to join them in the fall.

The pleasant nature of the class of 2014 has centered PHS through this difficult year of changes. As divisions began during registration to separate the two schools, the class of 2014 drew together more tightly. As final plans were made to divide the staff and student body, this class planned graduation.

When the snow and ice came, these students opened their homes to one another. As Lingle reminded the graduates, this class started middle school together, split into Helena and Riverchase Middle when Helena Middle opened and then reunited as the final unified class representing both Pelham and Helena.

Class of 2014 grad Kane Agan was in my classes for four years. Almost every day when he left, he said, “Thanks for today Mrs. Nolen.”

Agan’s kindness reflects the generous spirit of the class of 2014.

Thanks for these four years PHS Class of 2014. Thanks for your appreciativeness, compassion and kindness. Successes untold await you.

Lit Mag goes down to the wire