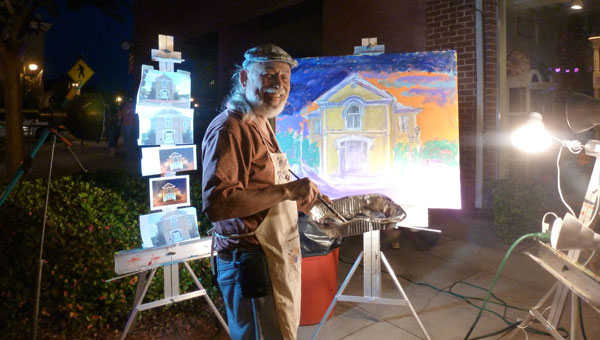 Jerry Roldan mesmerized Music on Main’s audience as he stood under bright lights and painted the old Shelby County Courthouse as the band played. The painting is a fundraiser for the Shelby County Arts Council.

The SCAC has served more than 8,000 children and adults in Shelby County since its inception in 2004 under the leadership of founder Terri Sullivan. The 501 c3 non-profit provides classes in the arts, quality diverse performances of multiple genres, venues to promote artists, as well as bringing arts to schools, senior citizen and juvenile detention centers, special needs and homeschooled children. The current goal is to build a 26,000-square-foot arts education and performance center in Columbiana that will serve Shelby County in multiple ways: Performance venue, dance, art gallery, classrooms, orchestra rehearsal hall, music practice rooms, catering kitchen and more.

Roldan is known for his community paintings. He retired to Lay Lake from Mobile and has offered his talents to benefit the SCAC.

Roldan choose the courthouse, one of the finest examples of Jeffersonian architecture in Shelby County, as his first benefit painting. Built in 1854 for $2,500, the building has morphed through many phases in its 158-year history: Courthouse, hotel, boarding house, apartment building, funeral home, library, fire station and even a school when Shelby County High School students took classes there after the 1939 tornado which destroyed SCHS’s east wing.

From 1954-1974, the building became Columbiana City Hall. In 1974, after the new City Hall was built, there was a heated town debate whether to tear the old courthouse down or save it. Thanks to the leadership and passion of Diane Bentley Ellis, Lorna Francis McLeroy, Ann Head, Sylvia McDonald and others, the historic building was saved by a citywide vote of 80-79. The Shelby County Commission acquired the building and this exquisite treasure was placed on the National Registry of Historic Places in 1976. Today, it houses the renowned Shelby County Museum and Archives.

To bid; proceeds 50 percent SCAC/50 percent Roldan: Go to Shelbycountyartscouncil.com, 669-0044 or message at Facebook SCAC page. Winner will be announced at last Music on Main, July 11, 2014.