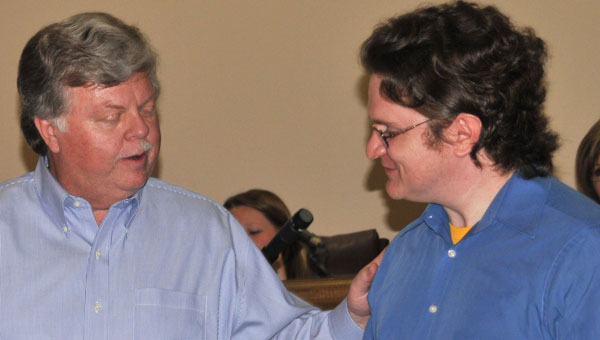 After participating in the International March Madness poetry competition sponsored by, “Think, Kid, Think!”, Helena’s Samuel Kent swept through the first two rounds with poems composed to include the words “diabolical” and “baroque.”

After winning the competition, he was honored at City Council as Helena’s Poet Laureate. This is almost certainly the first time this laurel has been presented to anyone in Helena and Kent had brought along his silvery cardboard laurel wreath crown, as well, to model.

Kent’s winning poem, “A Letter on Behalf of Ampersand,” reads like a Dr. Seuss book—all one need do is imagine the illustrations in one’s head as it is read. Here is an excerpt:

Though it neatly nestles nicely

and has a certain function

as a substitute conjunction,

we confess with calm compunction,

it’s abused as merely “and”.

Kent’s creative brain stands him in good stead in his day job as a software designer, but after his three children began school, he also began to draw cartoons, which gave birth to his website at http://i.droo.it/.

His earlier interest in poetry and literature has come full circle and Kent enjoys going into the school classroom when the class studies a poetry unit.

He notes, “Poetry requires and teaches strong vocabulary, rhythm and math skills and it helps students grasp onto other subjects.”

Here is a fun Kent poem from a previous winning round on a topic many will appreciate.

Bring on the Bacon

I was built for eating bacon:

I’ve a greedy need for feeding

on that salty, scrumptious meat.

How it frizzles, pops, and sizzles!

How I dream all day to munch!

I presume I could consume it

till my guts are gorged and sore.

I could savor all its flavor,

or just gobble it right up.

with this poor, pathetic pup.