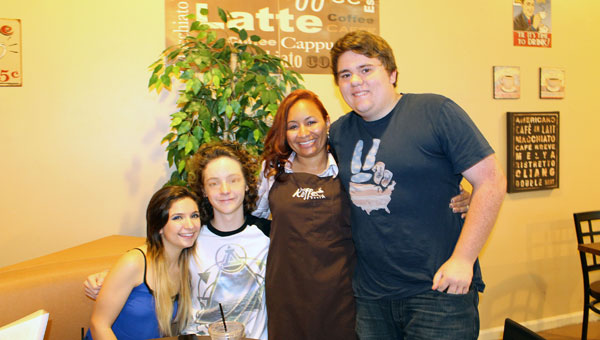 “We’re open all day from 6:30 a.m. to 6 p.m.,” Kai Smith said. “I have a large group of customers who come by for their morning coffee and pick up one of our chicken salad wraps so they already have lunch for later.”

“I went with a local caterer for the chicken salad. It’s delicious and I really enjoy working with other small business owners,” Smith said.

“I’ve missed these guys,” Smith said. A one-time teacher and a mom of teens herself, Kai Smith enjoys the energy of teenagers. In fact, Smith seems to fuel off of everyone’s energy. Recently, she moved her insurance agency to the same block as Kai’s Koffee allowing her to make a quick sprint between businesses so that she is always engaged with the community—in one business or another.

“We plan to keep having the Saturday musical events,” Smith said. “We’re going to begin them from 4-6, but if we’ve got a crowd, we will definitely stay open later.”

Kai’s Koffee also hosts a twice monthly Coffee and Conversations group on Saturday mornings at 8:30 a.m. Check out Kai’s Koffee’s Facebook or Twitter or just drop by at 2722A Chandalar Place Drive just off of highway 31 between CVS and Pump It Up. Friendly faces and delicious treats await at Kai’s Koffee.