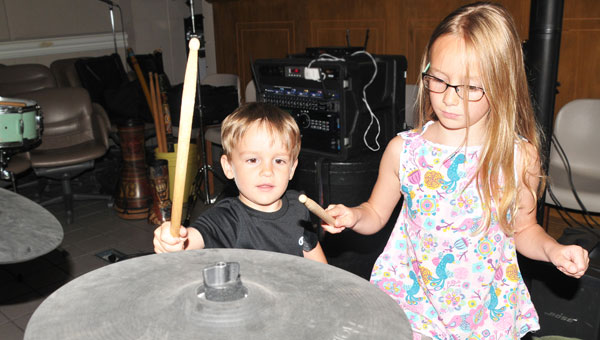 Brother and sister Maycie and Zane Lewis take time to try out the drums and cymbals after the first summer reading library program. (Contributed)

Helena Library Director Daniel Dearing greeted the many children and parents who came to the first week of the summer reading program. There is also a Young Adults division themed “Spark A Reaction,” and for adults, “Literary Elements.” Prizes will be given for those reading the most books at the final Wednesday, July 23.

Musician Mark Seymour took a deep breath and launched into a rapid drum solo that had the children excited and rapt.

All were invited to get up and on their feet to the lyrics, “Everybody’s doing the fizz, boom, read. Checking out books at your li-brar-y.”

Seymour moved to Alabama about 15 years ago and loved his adopted state so much that he wrote The Alabama Song.

Everyone was invited to join the conga line circling around the room to the song Happy. Next was dancing the Funky Chicken, The Jerk and the Macarena. The youngest children who had never heard or seen the Macarena watched the older kids intently and soon were imitating the well-known moves on their own.

“I grew up in Nashville and did the Country Music star scene,” Seymour said. “I started at five and by the time I was eight, I was making money. Later my band was called Mel and the Partyhats.”

“I grew up blessed to have good players around me. My two brothers are musicians, one is formally trained and the other plays by ear, like me. I’ve played with names like Kitty Wells and Percy Sledge.”

“Now I only play for kids,” he said wiping his brow, “this is instant gratification for the kids and for me.”

Make your summer a creative one