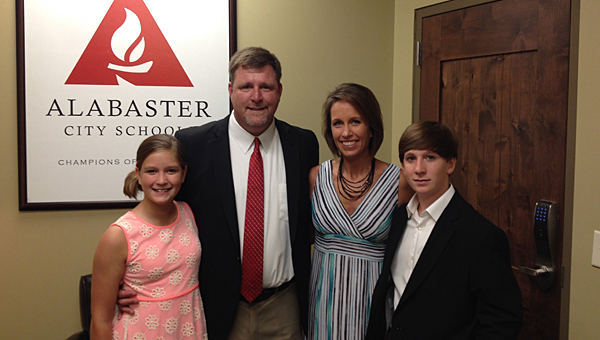 The current principal of Saraland Elementary School is preparing to move to Alabaster to serve as the new Thompson High School principal after the Alabaster Board of Education hired him during a special-called June 17 meeting.

Tangle has more than 15 years of experience in city and county school systems, and has served in teaching, coaching, administration and central office roles at every school level throughout his career.

“We are in a great system now, but we tagged this system as somewhere we’d like to be from the time it started,” Tangle said of the Alabaster City School System. “We are excited to meet the challenges that are asked of us.

“Go Warriors. I’m ready to suit up, and I’ve got a lot of plans for the future,” Tangle said.

“One of the standout things about Mr. Tangle was his vast experience,” Tanner said during an interview after the meeting. “He talked about the unique challenges of going from a larger county system to a smaller city system, and about forming your own identity as a system.”

Harrison said Tangle has experience in athletic, academic and facility management, and will help the system as it moves forward with plans to construct a new high school in the next few years.

“We are very fortunate to have someone with his ability,” Vickers said. “He really is the true package, and he understands how to get results.”

Tangle, who attended the meeting with his wife, Michelle, daughter, Kelsey, and son, Hunter, said he is working to find a house in Alabaster and enroll his children in the city’s schools.

“We knew the boundaries were unlimited here,” Tangle said. “I’m ready to do my part to put Alabaster at the top.”

By CASSANDRA MICKENS/Associate Editor HOOVER — The Hoover Board of Education reviewed an evaluation of Superintendent Andy Craig during its... read more