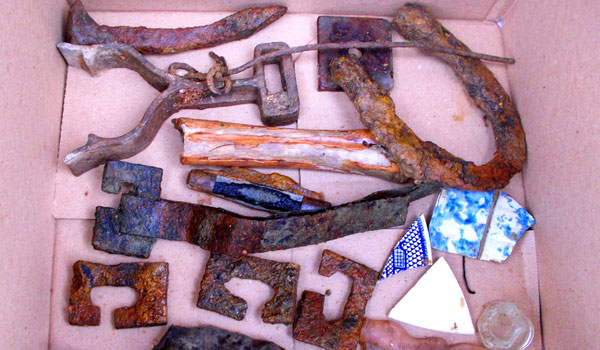 David Livesay unearthed a number of artifacts from the site of Columbiana’s proposed city park including six iron cotton ties, one porcelain doll arm and a pocketknife. (Contributed)

COLUMBIANA—Dave Livesay knew a cotton gin once stood on the ground slated to be used as a city park, so he walked the fields and studied old maps to discover more about the area.

Using a Columbiana Fire Insurance Map from 1909 as well as images from Google Earth, Livesay unearthed the foundation of the Farmers’ Union Warehouse and cotton gin, which were built in 1906, Livesay approximated.

According to research he has conducted on the buildings, Livesay determined that the building was a series of five connected brick warehouses, measuring 20 feet by 50 feet with 15 feet ceilings and a tin roof, which were located next to the cotton gin. Each warehouse had a set of steel doors, with iron shutter windows above each door.

The structure was “pretty big,” but Livesay did not know yet when it was torn down.

Livesay has recovered a number of artifacts from the bulldozed debris field including six iron cotton ties, one porcelain doll arm and one brass light cover with a stamp place. However, Livesay’s favorite find is a Northfield pocketknife, which was made in the 1880s or early 1900s, he estimates.

“It’s weird, I’m finding their lunch too,” Livesay said, citing oyster shells, a hambone and a leg bone, which is “pretty petrified,” among the list of items he found.

Though he has uncovered a number of artifacts, Livesay is not finished excavating.

“There’s no telling what else is out there,” he said.

Livesay will display the items at Liberty Day in front of the 1854 Old Courthouse, and following the event the items will be showcased at local schools and in the courthouse. In addition, Livesay has plans to use some of the bricks recovered from the area to make the base of a plaque in the location of the building.

Looking for something to do for Independence Day?

Several venues in Shelby County, including American Village, will host Independence Day celebrations over the next few weeks. (File) By... read more