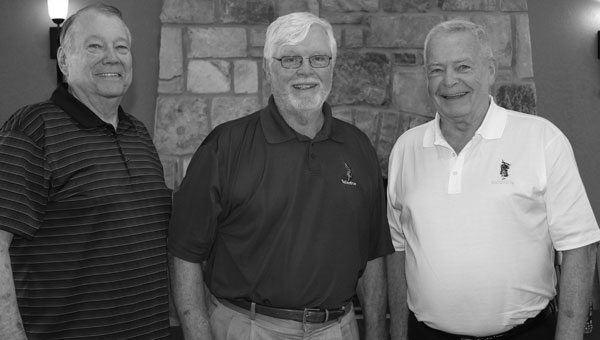 Ken Holler, Bob Cupp and Bobby Hayes were there at the beginning of Pelham’s Ballantrae Golf Club. (Contributed)

“When my partner Billy Fuller and I first visited Pelham, met the mayor and looked at the land designated for the golf course, we knew we wanted this project. What we didn’t know was how much fun we would have,” said Bob Cupp, golf course architect and designer of Pelham’s Ballantrae Golf Club.

Cupp, along with many involved in Ballantrae’s beginnings, including several founding members, attended Ballantrae’s 10th anniversary celebration in June. During the ‘70s and early ‘80s, Cupp designed courses for Jack Nicklaus—eventually beginning his own business with Fuller as his agronomist.

“Although Bob Cupp would never tell you this, he was recently installed in the Georgia Golf Hall of Fame,” said Ballantrae General Manager Butch Byrd who orchestrated the event.

Steve Mobley was developing Ballantrae with the help of Bob Sinclair. They approached then-Mayor Bobby Hayes with an idea.

“’They were building houses. They wanted a golf course,” Hayes, now retired, said. “Pelham owned the land—and it had to be a park or a golf course for at least 50 years. A golf course would bring more people here just as events at Pelham’s Civic Complex and Racquet Club had. We wanted Pelham to be a true destination city. ”

“Mayor Hayes told us to make the golf course the best that we could make it. Ballantrae was 10 years ahead of its time because it has Bermuda greens which allow for more competitive play,” said Cupp.

According to Cupp, Ballantrae’s distinction as a competitive course draws more players and events.

Credited with coming up with the idea for a golf course, Mobley laughed and thanked everyone involved in improving and maintaining the course.

“It was the determination and vision of Bobby Hayes and the artistry of Bob Cupp that created Ballantrae Golf Course,” said Mobley. “They were the visionaries.”

Cupp’s artistry extends beyond golf course architecture. In 2007, he published a historical novel about the beginnings of golf titled “The Edict.”

“Ballantrae is really special on the American golf landscape. It is proof positive that public golf works,” said Cupp.

Have pride in PHS