The Depot is a Helena landmark 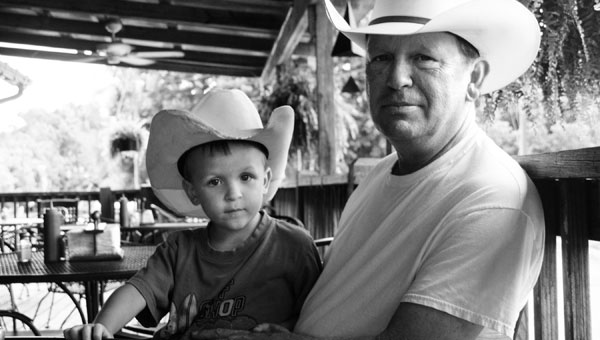 George Webster, owner of Stables of Alabama, and his son, George, always enjoy eating out on the porch at The Depot. (Contributed)

Where can you go in Helena to see the most dollar bills thumb-tacked to the walls and ascending up the rafters and old license plates keeping them company, as well as old cleats, assorted vintage oil cans, a railroad crossing sign and an announcement that says, “If you are grouchy, irritable or just plain mean, there will be a $10 charge for putting up with you?”

Where are you as you look at Helena team sport photos dating back to 2001—including the 9U Helena All-Stars 2011 and 2009 fourth-grade Wildcats plaque?

It’s not too hard to guess that you are inside The Depot, owned by Matt and Tiffany Bishop and also voted Shelby County’s Best Hamburger from 2011-2013.

“Sometimes people will bring us an old license plate or other collectibles,” Tiffany Bishop said. “But Matt is a picker himself—if he sees something old and interesting while we’re out, he’s going to want it for The Depot.”

Tiffany also said that they re-arrange the dollar bills from time to time. Among the many are a real Canadian five-dollar note, a not-so-real million dollar bill and on a recent day, affixed by two thumb tacks prominently by the porch door, a trillion-dollar bill, embellished with magic marker graffiti and a bearded face.

Matt Bishop has owned The Depot since 2003; prior to that it was an ice cream parlor.

Matt and Tiffany married just last August. “My friends told me, ‘He’s a good guy, you need to meet him,’” Tiffany said. “We both found ourselves at a party and my friends were nudging me and saying, ‘Go ask him to dance.’”

“One couple came here on their first date and signed their names and posted a dollar bill,” Tiffany said. “Later on, they married and for an anniversary gift one year, he came back and took that bill for her gift!”