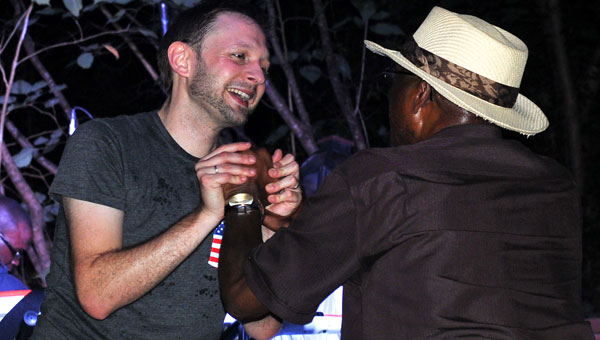 Oli Silk, British jazz musician, is greeted by an appreciative fan after performing at the Magic City Smooth Jazz event in Helena. (Contributed)

By dusk, the cell phones were glowing like fireflies throughout the crowd, most on video mode. Likely a fair amount of sharing of Helena’s first jazz concert occurred online during and after the three-hour presentation by Roland Gresham and Londoner, Oli Silk.
Portions of the estimated crowd of 1,000 arrived early with full picnics in tow and settled in, staying to groove happily until the final Michael Jackson song, “Working Day and Night.”
By the night’s final numbers, audience members were up on their feet and dancing in front of the stage.
Both musicians offered signed CDs of their work afterward.
“This was Oli Silk’s first visit to Alabama and he was very impressed with the support he found in Helena,” Mayor Mark Hall noted.
The Magic City Smooth Jazz concert, sponsored locally by J. R. Adams and Highpoint Properties LLC, brought happy faces in from beyond Helena, and even a few out-of-state visitors.
As per the evening’s program, “Magic City Smooth Jazz is a non-profit 501(c)3 corporation whose mission is to expose and engage audiences in underserved communities to various styles of jazz music.” This was the first Shelby County venue for the organization.
Roland Gresham played an acoustic version of Pharrell Williams’ “Happy” and even added a blues number to complement his repertoire.
Oli Silk introduced most of his songs telling a bit of its origin. He also showed his talent by multi-tasking musically from various instruments including a voicebox recorder, popular in many music genres.
One local musician commented, “For the size of the stage and limited equipment onstage and off, the acoustics provided a consistent quality of sound throughout the venue, thanks to the sound engineers.”
“It was noticeable that all the musicians found their groove and their sweet spot on the modest Helena stage and it showed in their visual performance and musicianship,” he observed.
Mayor Mark Hall said, “Since the event was such a great success, I am hopeful the series visits us again next summer with even more great jazz artists.”