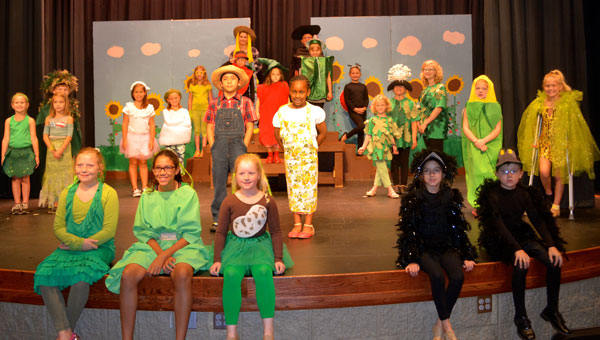 Pictured is the cast of Jack and the Beans Talk, performed at the Parnell Memorial Library Theatre, July 17 and 18. (Contributed)

“I started to hear the songs in my head as I read the book,” Phil McEntee said, describing the beginnings of his work with children’s theater more than 30 years ago in Avondale, when he adapted the book “Wombat Stew” for the stage. Since then, McEntee (“Mr. Mac”) has brought his talents to Montevallo, and the July 17 and 18 performances of “Jack and the Beans Talk” marked the eighth-annual Children’s Summer Musical Theatre Workshop.
Sponsored by the Parnell Memorial Library Foundation, children auditioned and then attended the free two-week workshop, which culminated in their play performance.
“Mr. Mac writes the script and the music,” Workshop Administrator Lorrie Ozley said. “What is so wonderful is that he creates a part for each child who auditions, so no one is excluded from the play.”
This year’s cast of 24 children rotated through a variety of activities during the workshop: Choreography, practicing individual lines and songs, running lines in groups, full cast rehearsals and practice with projecting voice, elocution and other vocal or physical warm-ups.
“Children perform on stage, so we see them come out of their shells, blossom and have fun,” Ozley said. “We aim to build their confidence and help them control their nerves, and it’s exciting to see the children take ownership of their roles and truly act.”
Workshop participants receive play scripts and CDs of the music in advance, so they can be better prepared for practice. Especially essential to the production was the assistance of teen helpers—former workshop participants, who helped build backdrops, supplied props, worked lighting and sound, assisted with choreography and even provided musical accompaniment during the performance. Montevallo Main Street Players also provided support and encouragement to the young actors.
“Our library is central to our community,” Ozley said. “When I was a new resident to Montevallo, I brought my children to story time with Mr. Mac, made connections through our visits to the library, and I became involved with the Foundation. The Library Foundation provides this wonderful and free opportunity for our children that goes beyond any kind of socio-economic boundary. All children are invited to participate.”
To learn more about the Parnell Memorial Library Foundation and its programs, visit their website at Parnellmemoriallibraryfounation.org or contact the library at 665-9207.

Children work to level a ruler with coins and a bottle to illustrate balance during a science session at Montevallo... read more