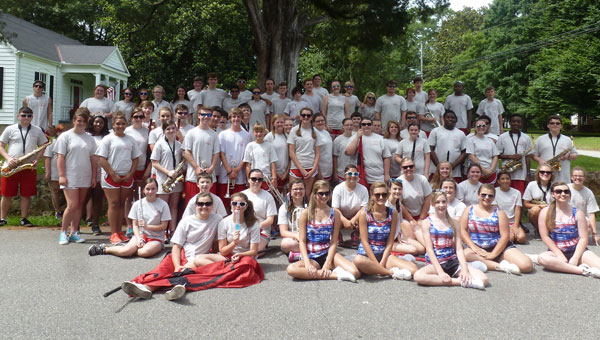 The Pride of Shelby County, the SCHS Marching Band will play Aug. 15 at 6:30 p.m. at Music on Main sponsored by the SCHS Alumni Association. (Contributed)

Thanks to the Shelby County High School Alumni Association, Music on Main will have one more concert night this summer, Friday, August 15, starting at 6:30 p.m.

The Shelby County High School Marching Band under the leadership of Band Director Tom Grigsby will perform as well as the SCHS Color Guard and SCHS Starlettes Danceline.

Grigsby begins his 18th year as band director. A graduate of Jacksonville State University with a double major in trumpet and piano, Grigsby played in both his high school and college bands. He lives in Columbiana with his wife and two children.

“This band has a strong sense of family,” said Grigsby.

The band has approximately 120 students, including some from Columbiana Middle School. Known as the “Pride of Shelby County”, the band played in Gov. Robert Bentley’s inauguration parade. Gov. Bentley graduated from SCHS where he was president of the Student Council.

Also playing at Music on Main on Aug. 15 will be three gospel acts. Opening the night will be Three Brothers with Love, the gospel trio of brothers Harrison, Robert and Michael Moore with Frances Love on piano.